Paul Adorian, one of the founders of IPAF and an early pioneer of access, has written an engaging memoir of his days in the industry. Murray Pollok reports.

It’s not every business book that admits to a ‘financially crippling business failure’ on its first page, but Paul Adorian’s candour is in evidence throughout his newly published memoir.

That inauspicious first experience – never repeated - didn’t stop him from forging a successful and prolonged career in powered access, the details of which are described in his lively and aptly titled Don’t look Down! 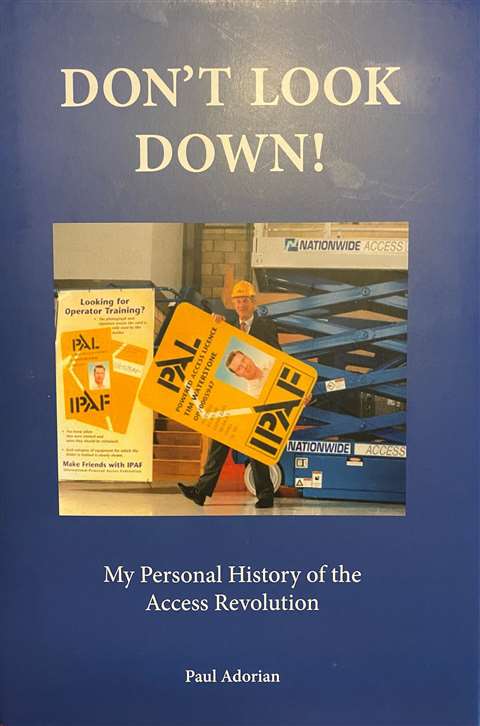 Covering his pivotal early involvement in introducing MEWPs to the UK’s plant hire industry to his central involvement in the creation of IPAF and the promotion of access worldwide, the book is the perfect primer for anyone interested in the origins of the present-day industry and in particular how access became a mainstay of the rental industry worldwide.

In truth, Paul could be said to have been an instigator of much that has happened in the industry over the past 50 years: the idea that aerials were the perfect rental product; the need for the industry to act together in areas such as standards and training; and the continual effort to promote safe working at height.

There was something of chance in his early involvement in the industry. He was aware of hydraulic platforms – as they were then called – as early as the 1950s, when his father had used them to in his job in broadcasting.

That prompted an interest in fire brigade ladders, which he then took to his first job in plant hire, with Eddison Plant Ltd near London, where, as a regional manager in 1969, he suggested the addition to the fleet of a couple of 25.9 metre Simon platforms. He subsequently moved to John Laing and its new plant hire business, Elstree Plant Ltd (EPL), where he again successfully lobbied for aerials to be added to the fleet.

Founding figure
He very early recognised that aerials were a singular product; “I was convinced that to succeed in the hire of aerial platforms one had to completely forget virtually all one had learnt about hiring out earthmoving equipment and cranes…Some thought they were dangerous, others that they would be unreliable. Most thought I was completely mad.”

Paul’s flair for marketing is shown in this early advert for EPL platforms in the UK.

Paul was ahead of his time in many respects. He was involved in the very early import of a 50-metre machine from Calavar in the USA, signalling an international perspective on the business well before that was common. Less well known is an early foray into mainland Europe, in Maastricht, where Paul wanted to create a joint venture with JLG founder John L Grove to acquire the MMD manufacturing business to produce self-propelled telescopic booms.

That deal fell through – “I have always looked back on this event as a terrible mistake on the part of the Dutch”, writes Paul - but John Laing and EPL still created an access rental business in the city. He reports early encounters with the owners of Ruthmann and Wumag, and Bumar in Poland.

Those who have joined the access industry in the last 30 years will perhaps know the author best as one of the founders of the first international access organisation – the International Work Platform Association (IWPA) in 1976. By 1983 it had 70 members, and soon after it merged with the access manufacturers association to become the IPAF that we know today.

IPAF becomes international
Paul was at the helm as managing director as IPAF became a truly international body – the book provides the colour behind decisions like the creation of its US subsidiary, AWPT in 2003, and the launch of the training scheme in 1993.

The latter part of Paul’s career was occupied by his role at IPAF, consultancy work through his Paul Adorian Associates, and the EU certified body Powered Access Certification (PAC) that he acquired from IPAF. It was a source of frustration that Brexit prompted the sale of PAC in 2019. (On Brexit, he notes; “in my opinion, it could well result in a massive downturn for the already diminishing manufacturing industry within the UK.”)

Still, his position in the history of the industry is secure. As he writes, “I feel proud to have launched the IPAF training scheme back in 1993 when I realise that there are now over 600 training centres in more than 60 countries around the world.”

The first page of Don’t look down! may include that brutal admission of early failure, but the following 164 are testament to his success in almost every other endeavour.