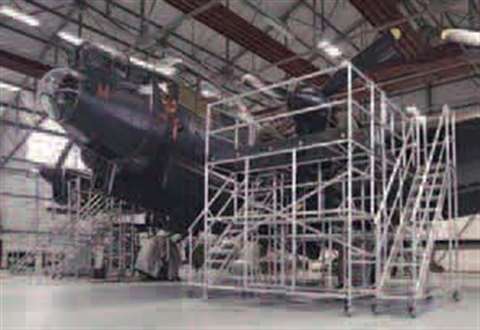 Historic aircraft require special maintenance, and a special staging system has been designed for this WW2 Lancaster bomber

In the main configuration, the modular Alutec platforms are shaped to dock around the contours of the four 1,460 bhp Rolls Royce Merlin engines and the three-blade propellers, around which most of the maintenance and inspection work is carried out. The platforms can also be separated and reconfigured, providing the Lancaster's 25-strong ground crew with safe access to every area of the aircraft that cannot be reached from ground level.

The plane is affectionately known as Mickey the Moocher and is one of only two airworthy Lancasters in the world. It operates alongside a Dakota transport, two Hurricane fighters, two Chipmonk trainers and five Spitfires to make up the BBMF.