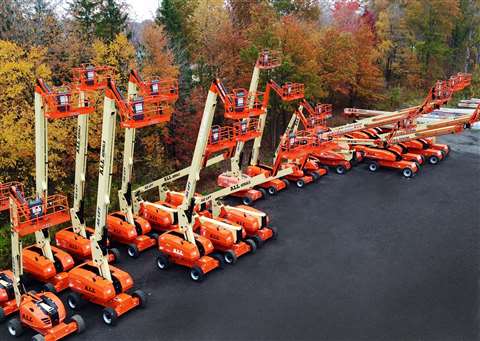 ALL Aerials has purchased 60 JLG boom lifts due to increasing customer demand.

ALL Aerials has added 60 new JLG aerial work platforms to its fleet because of high demand. ALL Aerials is a standalone division of the ALL Family of Companies. The JLG purchase package features a mix of telescopic boom lifts and articulating boom lifts. Of note, 40 of the 60 units are in the 60- to 86-foot height range, an area that is heavily in demand in mills, processing, general industrial, and the booming vertical construction markets.

For comparison, the SJ and AJ models are a bit longer than the comparable S or A models, and come equipped with an optional jib attachment (6 or 8 feet, depending on the model) with vertical rotation of approximately 130 degrees, allowing additional flexibility and the ability to move up and over edges of structures. Topping off the group, the 1200SJP and 1350SJP telescopic boom models feature platform heights of more than 120 feet, horizontal outreach of 75 to 80 feet, and a 1,000-pound capacity in the restricted working envelope (500 pounds in the unrestricted working envelope).

“Adding this number and variety of lifts to the fleet will enhance ALL’s availability to work in high-demand and surging markets. Our customers in refineries, mills, and construction have a great need for the flexibility and durability JLG lifts can provide,” says Michael Liptak, president of the ALL Family of Companies. “We continually manage our fleet to ensure we have the best machines for our customers.”