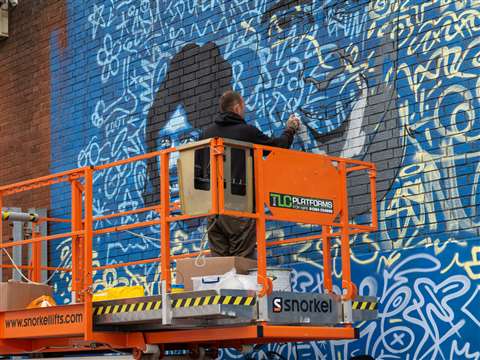 Francis joined Birmingham City FC in 1970 as their youngest player. Nine years later, in 1979, Francis made a transfer to Nottingham Forrest, becoming the first British million-pound player in football. Bellingham joined Birmingham City FC in 2019 and beat Francis by becoming the football club’s youngest player by 101 days. Like Francis, Bellingham made a huge transfer, moving to Borussia Dortmund in 2020. Both players are connected by their original ties with the Blues.

The Birmingham City Football Club, in association with art4charity and Gent48, wanted the piece, Record Breakers, to be produced as part of the Digbeth Project that was set-up in May 2020 by art4charity. The Digbeth Project hopes to represent the people of Birmingham coming together through Covid-19 by implementing various artworks throughout the city. There are nine more unique creations planned for the coming months.

“We are excited to be part of the continuation of the Digbeth Project, and to once again support Gent48 with the tools to make this happen safely,” said Paul Latham, group CEO at TLC Platforms. “The Snorkel S3370RT continues to be our lift of choice for this application, delivering a stable platform at all heights, and the large platform with roll-out deck extension means there is plenty of space for the creativity to happen.”

Gent48’s first mural, Forward in Unity, depicted the front-line workers’ fight against Covid-19. This new mural incorporates the artist’s signature style of a character-based mural, and depicts the two football icons in blue, their first team color. It is positioned at the heart of the Blues Fanbase, Tilton Road End in St Andrews, Birmingham, UK.

Prints of the murals are available to purchase at the art4charity website, with the proceeds of the prints going to the Lord Mayor of Birmingham’s Charity, where they will be donated to three chosen charities. These non-profits include Acorn Children’s Hospice, Birmingham St Mary’s Hospice and SIFA Fireside.

Andrew Fishburn, managing director at Snorkel UK and vice president of strategic accounts EMEA for Snorkel, added, “We are delighted that a Snorkel scissor lift has been selected for such a worthwhile project in the city of Birmingham. We look forward to seeing how the rest of the project develops.”