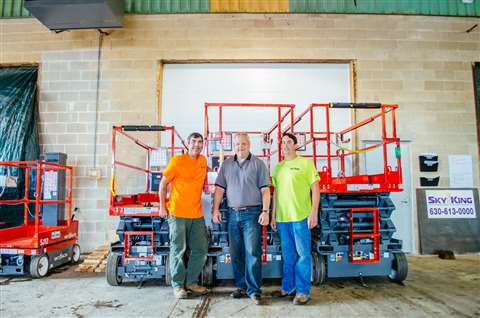 Skyking, a Chicago-based startup rental company, has invested in all Skyjack equipment.

“It’s the Chicago mentality,” Paul Zaremba says. “People are happy to help us out.”

Zaremba is one of the three founders/owners of Chicago-based SkyKing Lift Rentals, which officially opened for business in January 2015. Along with business partners Robert Mulvey and Jeremy Coyne, the trio has a combined 35 years of experience in the equipment rental industry, and the idea for the rental business came to when one of Chicagoland’s well-known mid-size rental companies was bought.

“We were approached when the area’s biggest local independent company, Metrolift, was sold,” Zaremba says. “Skyjack said they’d love to have another loyal, local, independent company here in Chicago so we all got in touch, went through the process, put together a business plan and everything was approved in early December 2014. In January, we quit our jobs and started SkyKing.”

The company has now been in business for seven months and conditions for equipment rental throughout Illinois couldn’t be better. SkyKing currently owns 170 pieces of equipment and in early August, 150 units were out on rent, Zaremba says. He expects the start-up to achieve $1.3 million in revenues this year and is aiming for over the $2 million mark in 2016.

“The winter can change business drastically, though,” Zaremba admits. “If it’s cold and dry, people will keep working, but no one wants to be in an 80-foot boom lift when there’s a foot of snow and slush on the ground.”

SkyKing’s fleet is made up mostly of Skyjack equipment.

“The bread and butter for us are the 19-foot and 26-foot electric scissors,” Zaremba says. “Our core customers – electricians, plumbers and HVAC guys – use those the most.”

Zaremba says SkyKing equipment is peppered throughout jobsites around Chicago, including work at the Aurora, IL outlet mall, the Lake Forest Hospital and a new warehouse for toy brand Lego.

“We do a lot of onesie-twosies, too, which is fine,” he says. “We don’t want to be too dependent on one project or customer.”

The Chicagoland area is ripe for the equipment rental business due to several factors. From 2011 to 2013, there was a lot of suppressed demand. Contractors and companies wanted equipment, but projects were shelved. Now, work is starting to pick up and the market is really taking off. “It’s a good time to be in business,” Zaremba says.

The company, which employs only its three founders, plans to stay small through the winter. “We have good friends we have known through the years that would love to come work for us, and we’d love to have them come work for us, but it’s still our first year of business and we’re in Chicago – it’s very seasonal,” Zaremba says. “We don’t want to have somebody quit a steady job at a bigger company, come here and then have to lay them off for a couple of months because winter might slow down. So, we are just going to suck it up and get through the winter and then hopefully in spring we’ll bring on a driver, mechanic and possibly somebody to help out in the office.”

Which is most likely what the company will need as it looks to expand into markets it’s not serving and flesh-out its fleet. Zaremba says SkyKing re-rented a number of booms and unique aerials this year so it is looking to purchase articulating and stick booms up to 60 feet in working height.

“We’re moving forward cautiously with the booms because we’re going to move into different types of customers that we really haven’t made headway with yet,” Zaremba says. “We want to have a full fleet.”

Yes, most of SkyKing’s equipment is Skyjack, however, in the past few months the company has invested in Custom Equipment’s Hy-Brid 14-foot scissors as well as a few pieces of Genie equipment, including a 5,000-pound telehandler.

“We’re filling the gaps in our fleet,” Zaremba says. “However, there’s a lot of economic sense to having a limited number of brands because then you don’t have to carry as many parts, your mechanics are a lot more efficient because they’re working with the same types of equipment most of the time and then, overall, you have a level of partnership between vendor/customer and the manufacturer because you’re ‘on the same team.”

So, why Skyjack? “The biggest benefit is the durability,” Zaremba says. “They tend to hold up really well, the function good on jobsites and they’re made for the industry. No one complains when you bring them a Skyjack.”

Of course, Zaremba admits, every machine has bumps and bruises and having a fleet of more than 100 units guarantees a problem here and there. But he also says Skyjack equipment has a resell value of 20 to 30 percent of its original purchase price – and that’s at 10-years-old.

“They’re very easy to move in a secondary market,” he says.

Next year, SkyKing aims to spend around $2 million on capital expenditure. They might add an additional $500,000 to $600,000 for scissor lifts – since a good portion of the $2 million will go toward booms.

The company aims to find the middle ground that Metrolift once had. The Midwest, and Chicago market especially, is ripe with independent rental companies, so SkyKing says it will focus on “service, service, service.”

Zaremba says the equation to success equals fewer brands, newer equipment, incredible service and a staff that knows how to squeeze every penny out of a buck. “We want to be the local friendly company where you actually know the people like independent companies offer, but at the same time, have newer equipment and better service like the larger rental companies,” he says. “We’re taking the ‘best practices’ approach to our business because we’ve seen what works and what doesn’t work and we’re using those factors as our business plan.”

He says SkyKing is keeping its eye close on two new developments, however. Ahern Rentals recently opened in Lamont, IL and despite Ahern having the family approach to rental, customers look at the company like it’s a United or Sunbelt.

“Ahern has a family owned feel,” Zaremba says. “And yet they have a lot more firing power than us little guys.”

Zaremba also says rumors have been swirling about BlueLine Rental reaching further into the Midwest market. BlueLine currently has one location in Illinois, and it’s about three hours outside of Chicago, in Bloomington, IL. “I don’t know if BlueLine will try to do a startup themselves or if they’ll buy somebody,” he says, “but I’m watching everything very closely.”

So, if the market becomes saturated, again, Zaremba says it all comes back to servicing customers.

“When somebody calls us, we respond right away,” he says. “We know what we’re doing. We’ve all been doing this for a long time.”

Zaremba says SkyKing prides itself on providing the right equipment to the right job on time. “We’ve been successful so far,” Zaremba says. “And I really have to give Robert credit for building relationships. We’ve had situations where somebody’s called off a lift and Robert is down the street with this truck and he picks it up in five minutes. The customer is always surprised.”

“We want to blow people’s minds with our service, because, let’s face it – it’s a commodity,” Zaremba says. “We all have lifts. We all have trucks. We all have the same brands. So, how do you separate yourself?

“We are the guys who get it right. Nobody wants to worry. When a customer needs a lift at 7 a.m. on a Wednesday, they won’t have to call us at 7:45 a.m. that day asking where the lift is or why it’s on the wrong jobsite. He wants things to be right. And they will be right.”

In a place like Chicago – which Zaremba calls “the world’s biggest small town” – someone always “has a guy.”

And Zaremba wants SkyKing to be “that guy.”

“We’ve been surprisingly well-received,” he says. “It’s a testament to Robert and Jeremy, but also the willingness of people to give us a try. Again, that Chicago mentality; ‘Yes, we’ll work with you guys, we’ll help you, we’ll get you started.’”