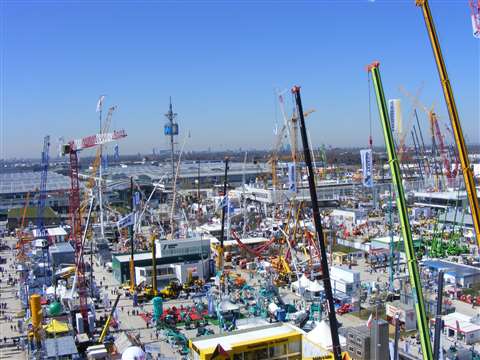 Access Equipment manufacturers have been celebrating a successful Bauma, but remain cautious when it comes to the European market.

A record 530,000 visitors from more than 200 countries around the world attended last week’s Bauma exhibition in Munich, Germany. Per Torp, export manager at Time International, manufacturer of Versalift van mounts, said, “We have never seen a show like this before. We have had more serious customers each day here than we usually get in a whole week of a normal exhibition.”

Mr Torp’s sentiments were echoed by a large number of access-related manufacturers at the show, who said their stands had been busy throughout. However, many manufacturers were pinning their hopes on regions outside Europe, including South America, the Middle East, India and Australasia.

According to organiser Messe München, 200,000 visitors came from outside Germany, the greatest number of international visitors in Bauma’s history. But many access equipment manufacturers at the show said there were fewer visitors from North America and China than they had been expecting.

During the exhibition, Haulotte reported first quarter revenues for 2013 of €84.5 million, 5% lower than same period last year which was €89 million. North American sales were down -23%, followed by a -11% decline in Europe.

Alexandre Saubot, chief operating officer of Haulotte Group, attributed the decline to an uncertain economy in Europe where customers are hesitant to purchase large volumes of equipment, instead opting to buy piece-by-piece.

“There is nothing to worry about, the US is down because of a timing issue,” said Mr Saubot. “We have a lot of expectations with Bauma and the second quarter.”

Nevertheless, financial figures like this will be concerning for Haulotte, particularly as the market in North America is showing signs of growth. At the IPAF stand, CEO Tim Whiteman shared the association's rental report results, which show that rental revenue growth in the USA will be 7% up on last year, at $7,442 million. Europe, on the other hand, will be 4% up from last year, at €2,426 million, including all the disparities between countries in that continent.

One of the main sources of revenue for manufacturers in Europe is replacement, with many of them stating that customers have put off replacing machines through the economic crises and now are being forced to do so because of the age of the equipment.

This air of uncertainty has not stopped manufacturers developing their products to meet modern requirements, however. For example, JLG launched its compact RS scissors into the European market at bauma, following their recent launch in Asia and North America. At the other end of spectrum Palfinger Platforms introduced the 90 m P900 truck mount for a range of applications including the growing wind turbine market. Terex AWP is also looking to major energy-related projects with its 180 foot Genie SX-180 boom, which was a surprise launch at bauma.

Smaller companies like France-based ATN are getting in on the act too when it comes to innovations. It introduced its 11 m working height PIAF 1100R vertical mast at Bauma, designed to provide operators with full reach at 10 m – one of the most commonly-required working heights in this sector. The company is also promising a range of new products.

Chinese manufacturers were also making their mark at the exhibition. For example, Henan Jiange Crane Company (JHC) moved into powered access equipment a year ago, and already has four scissors and three booms in its range. While it hopes to be selling 2,000 units a year in China alone by 2018, the company was not at Bauma for the European market. Instead Jack Dai, senior sales manager, said it was there to attract buyers from developing countries, including Northern Africa.

Read more about the show and the range of new products launched there at www.khl.com and in the forthcoming Bauma feature in the May/June 2013 issue of AI.