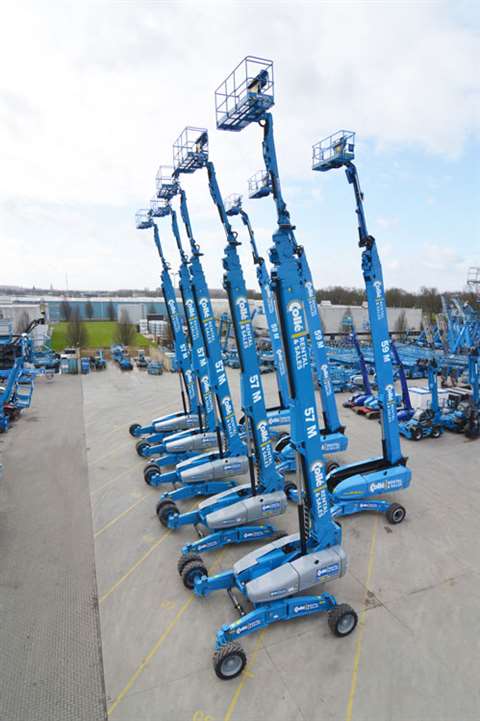 Netherlands-based Collé Rental and Sales has secured a €50 million loan from the European Investment Bank (EIB), to expand and electrify its construction rental fleet.

Collé, a fourth-generation family-owned company that operates 19 branches across the Netherlands, Germany, Belgium, Luxembourg and Denmark, said the funds would be used as part of a fleet replacement initiative.

The initiative will see the company, which has around 22,000 units in its rental fleet - including a large number of aerial platforms and telehandlers from brands such as Genie, Palfinger, Manitou and Magni - invest in new low-emission models.

Guaranteed by the European Fund for Strategic Investments (EFSI) as part of the Investment Plan for Europe, the loan was described by the rental company as a demonstration of its commitment to sustainability.

Frits Collé, the company’s CEO, said, “At Collé we say that ‘blue is the new green’, referring to our company colours. With this EIB financing we take another few steps forward towards that objective.”

According to the company, it will also use the funds to replace its ground-moving units with more fuel-efficient machinery wherever possible, “in order to actively contribute to sustainability targets”.

It will also enable the business to further the digitalisation of its rental fleet, which it is aiming to make fully “internet-of-things-capable”.

EIB Vice-President Kris Peeters, said, “What Collé does in terms of combining demand for heavy machinery with the increasingly urgent need to become more sustainable as a business deserves a lot of praise.

“Renting machines instead of buying means more efficient use of valuable resources, feeding into much needed circularity and sustainability for the construction sector and industry.

“I’m glad that the EIB can support Collé in these plans and look forward to seeing more Dutch companies taking such important steps towards environmental sustainability.”

European Commissioner for the Economy, Paolo Gentiloni, said the loan was an examaple of the role that the construction sector can play in supporting the green and digital transition; “Backed by the Investment Plan for Europe, the financing will contribute to electrifying Collé’s fleet of rental machinery for the construction sector, and make it more digital.

“This will not only benefit Collé but also the construction companies that can rent and re-use the machinery, thereby supporting the circular use of equipment in the sector.”