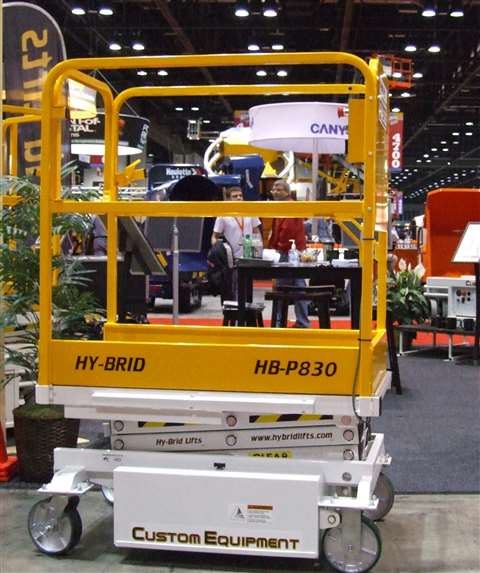 Custom Equipment showed off its new HB P830 scissor lift at the 2010 Rental Show in Orlando.

Custom Equipment is growing globally. Lindsey Anderson talks to the business about what people can expect next.

In 1981, had Steve Kissinger been asked where he envisioned his business going in the next 30 years he probably wouldn't have said India or the UK. In fact, he might not have even thought his business would expand beyond Wisconsin, where he and his wife, Lynn Kissinger, started manufacturing lifts for the mausoleum industry.

But today, things are quite different for the low-level access manufacturer - and business outside of Wisconsin is some of the biggest business Custom Equipment reels in. I am scheduled to speak with Steve Kissinger early one morning before the day really takes shape, but when I call, plans need to be changed.

"Do you mind if we push our talk back an hour?" Kissinger asks. "I'm really sorry, but we're supposed to be having this talk with a guy in Russia right now."

Located in Richfield, WI, Custom Equipment manufactures low-level and low-weight scissor lifts. It was a mere five years ago when the company first started exporting to the UK after meeting delegates and new contacts at an International Powered Access Federation (IPAF) conference.

"[When we first started business], we contacted the top 100 independent rental houses," Kissinger says when asked how they got off the ground. "We started out small and just kept on going from independent to independent while showing them all a new pathway for rental fleets."

The company's self-propelled and push-around scissors are best-known for their tight turning radius, small size and low weight - the popular HB-830 has a 25-inch by 44.5-inch deck with a 14-foot working height while weighing in at 1,115 pounds. The unit has been so well-received in the industry, that earlier this year it was presented with an International Award for Powered Access (IAPA) in the low-level category. The judges noted, "In a fast growing sector of the access market we were impressed by this company's approach to developing low-weight scissor lifts. The winner was recognized for its performance in combining capacity, compactness and mobility."

"Today's building trends are dictating less concrete and more cost-effective manufacturing," says Chris Dossin, Custom Equipment's newly appointed vice president of sales and marketing, who brings a career's worth of experience in the access sector, including more than 20 years with Skyjack. "With that, the lightweight footprint of the Hy-Brid machine is kind of the cornerstone for what brought us to the dance and what is going to drive our progress forward. When you compare the features of our machine to other machines on the market, we're different from those commodity machines because we have light weight, low stow height and a soft footprint on sensitive flooring surfaces. We have the niche markets that other people can't deliver a product in."

Custom attributes its light-weight scissor status through computer-aided design where research and development plans from "the top down," Kissinger says. "As we progress with the design, every piece on the machine is looked at. We can look at each individual component, where stresses are, where strengths need to be and we can change [anything]. The whole product is designed around that concept."

This concept and resulting low-weight platform makes Custom's equipment ideal for any type of floor where loading is a consideration. "Our real forte is not necessarily when the slab is on grade, but when you get any slab that's elevated," says Dossin. "Any type of mezzanine, second, third or fourth floor is where the beauty of our machine really comes through in allowing people to get to work faster in the cementing process and have a less negative impact on the surface that they're working."

In 2007, before the financial bust, Custom Equipment was rapidly expanding. The company tripled its sales that year and was predicting a further doubling in 2008. They had expanded into European and Japanese markets and were working deals in Australia, the UK and Belgium.

Kissinger won't now elaborate or speculate on 2011 sales or projected 2012 figures, other than saying business is split internationally and domestically 50/50 (in 2007, the ratio was 70 percent North America, 30 percent export.)

One big export order recently came from UK equipment rental company Speedy Hire, which invested $1.6 million in June 2011 to expand upon its existing range of Custom Equipment lifts. Speedy Hire is one of a few major rental companies to provide equipment for construction work on the London Olympics. According to Dossin, the deal included "several hundred" units and was one of Custom Equipment's largest export deals for the year.

Custom does continue to grow, however not quite like it was during the access and construction heydays of the mid aughts. The company just recently moved its assembly facility and corporate headquarters to a new location in Richfield, WI, where it is capable of manufacturing up to 12 machines a day. "We're not currently running a full shift," though, Kissinger says. "The economics are not here at the moment, but we're planning for the future."

Dossin says Custom is planning to ramp up, and also noted the company is not feeling any supply chain pains like some competitors, due to addressing the issue early on this year with their suppliers. "They're very good," Kissinger says. "They're all on board with us and we haven't had any supply chain issues."

So what's next? More growth.

"We're looking at opening up our global marketing channel," Dossin says. "Some opportunities are stronger than others based on demand and economics; the ability of people to be able to finance fleets and also their work practices. Some of the developed countries don't necessarily have the same work practices as we do in the US, North America or other developed areas. It's a matter of going and finding what customers need in those countries and then structuring our product around the customer need."

Custom is currently looking at areas to penetrate such as India, where workers are accustomed to using scaffolding instead of aerial work platforms. They also have a bug to expand in Canada, where they've continued to explore Eastern, Western and "all areas in-between" of the country.

"We are building and designing a manufacturing facility and a business model that we can take and implement - basically, a plug-n-play system - anywhere globally," Dossin says when pressed for manufacturing facility plans. "So that is the intent - to have that availability to be able to manufacture where the demand is. The plan is not to go set up bricks and mortar today, but to have that model that we can quickly and decisively implement."

Custom is also planning its next new product, though both Dossin and Kissinger are tight-lipped about details. "We do have something in research and development, but we can't say more," Kissinger says. "Something is definitely being worked on."

Overall, Dossin believes the economy and market are now over the point where everyone has rationalized and defleeted and are instead in the process of rebuilding and replacing. "I think [customers] are looking for the opportunities that will generate revenues, but not necessarily in mainstream products," he says. "If there are specialty products and our hybrids fall within that category, there are better returns to be had on rental rates and a product that is not the same as everyone else has. I think that distinction is where we hold our optimism."