China-based MEWP manufacturer Dingli has completed the construction of a new $235 million (CNY1.5 billion) factory, for the production of its boom lifts.

The state-of-the-art facility is located in the province of Zhejiang in eastern China and represents the completion of fourth phase in Dingli’s ‘Future Factory’ expansion project - which aims to capitalise on China’s rapidly expanding access rental sector.

The site spans an area of 362 acres (1.46km) and will enable the company to produce a new articulated or telescopic boom lift every 30 minutes.

The design and development of Dingli’s ‘intelligent factory’ involved an international team of scientific engineers and researchers.

Based at the company’s European research & development centres in Italy, through its partnership with Magni, and in Germany, through its Teupen partnership, the team used data modelling and network architecture to develop and design the factory and its technology.

The new premises’ advanced technologies and facilities include an ‘intelligent welding robot workshop’.

Dingli’s modular booms see 95% of structural parts and 90% of main components being common across the the series.

The company’s new facility will assemble the boom, turret, and frames of its boom models, using what the company claims is the world’s first and largest flexible automatic welding line for boom parts.

The site also incorporates two advanced automated spray lines that were installed at a cost of $23.5 million (CNY150 million).

According to the manufacturer, the spraying lines offer “the highest environmental protection level in the industry” and were chosen as part of Dingli’s efforts to minimise its impact on the environment.

“It realises pre-treatment and plastic spraying with zero emission, curing without VOC emissions, and the wastewater generated in the whole process reaches the direct discharge standard,” said Dingli. 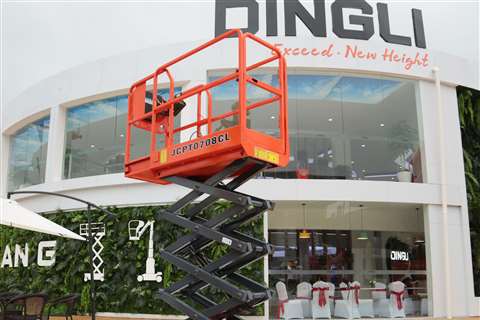 Interview: Teupen and Dingli deal
Martin Borutta, CEO, Teupen, on its recent part acquisition by Dingli and the future of tracked platforms