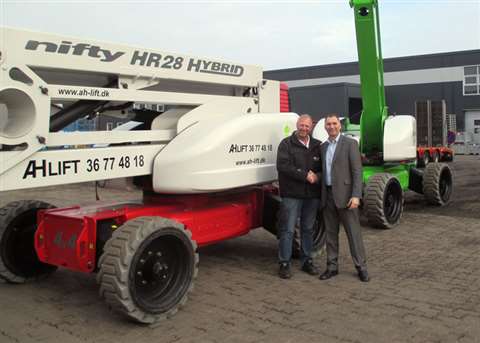 AH-Lift, which has operated in the Copenhagen area of Sealand, Denmark, for nearly 30 years, has taken delivery of the country’s first Niftylift HR28 Hybrids.

The two machines were purchased mainly because of their Hybrid power system, which allows them to be used inside or out with no noise, said the company. AH-Lift specialises in difficult to access buildings and has invested in a number of Niftylift models over the last year.

The HR28 Hybrid can lift three people and tools to a working height of 28 m or an unrestricted outreach of 19 m.

Its hybrid system utilises power-optimised diesel supported by the machine’s batteries when extra power is needed. A Diesel Re-Gen feature recharges the batteries without a mains power source and the electric-only mode allows zero-emission operation.

The Advanced Exhaust Purification system, including catalytic converter, reduces exhaust emissions: particulates by 30%, hydrocarbons by 80% and carbon monoxide by 90%, said the manufacturer.

Finn Aalberg, founder of AH-lift commented, “The low fuel consumption and carbon footprint that the Niftylift Hybrid system offers is a big advantage in a city like Copenhagen. I’m convinced that these [Hybrids] will prove to be not just a sound financial investment, but also the only ‘responsible’ choice in terms of future environmental sustainability.”