HDW, Genie’s authorised distributor in the Netherlands, Eastern Europe, Belgium and Luxemburg, is celebrating 25 years of collaboration with the manufacturer

HDW, founded in 1982, serves customers in 40 European and non-European countries. As part of its 38 years of activity, HDW made the decision to become a Genie distributor for The Netherlands in 1995. This agreement expanded significantly less than 10 years later with the appointment of HDW as the official point of sale for Genie aerial equipment for the whole of Eastern Europe. Since 2010, HDW has also provided Genie products in Belgium and Luxemburg. Outside Europe, the company supplies machines via operational lease contracts in cooperation with Genie. 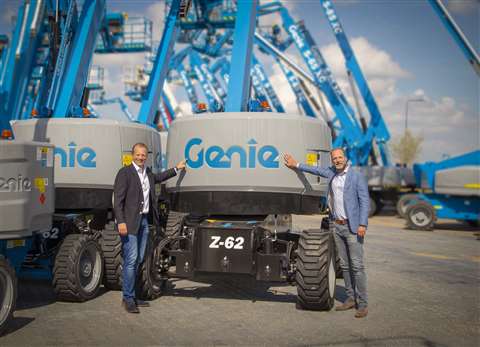 “For Genie, the success of a solid working partnership comes with both mutual trust and sharing the same vision. In this respect, HDW has always been a steady partner that believes in quality and innovation in terms of the products it sells, as well as the level of service that it provides. They also have a very straightforward approach that makes them easy to work with,” says Jacco de Kluijver, Genie VP sales and marketing, Terex AWP, Europe, Middle East, Africa and Russia (EMEAR) region.

He continues, “We can say that during these 25 years, our companies have grown together. Genie is proud to be represented by the HDW team and looks forward to continuing our collaboration for many years to come.”

Remko Jonkergouw, manager, sales and marketing, at HDW, added, “The key to the success of our long track record with Genie is that we do not see ourselves as a Genie customer, but as a partner. On top of that, we share the same values and put a strong focus on quality, customer service and purposeful innovation. In this respect, we can say that Genie is at the forefront.”

He continued, “For HDW, innovating with our customers is important. The fact that we have been able to rely on Genie to support us has played an important role in our company’s successful expansion. The development of the new Genie 4-m (13-ft) platform for Genie Xtra Capacity™ (XC™) booms is a recent example of how well our companies work together to support our customers’ job-specific requirements.”