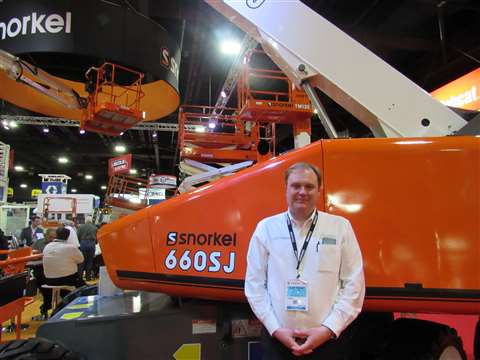 If only one word could be used to describe Snorkel right now, it would be “evolving.

The company has undergone significant changes in the last three years; from Don Ahern’s majority share purchase in 2013, to the appointment of Matthew Elvin as its new CEO in 2015, and, most recently, the company’s massive investments into its sales and engineering teams alongside new product developments and a new facility. Maybe the word shouldn’t be “evolving,” after all, but instead, “new.”

In 2015, the aerial work platform manufacturer posted 30 percent higher sales than the previous year, putting $120 million down in the order books. And Elvin sees 2016 as another year moving forward at a steady clip, the word “growth” rolling off his tongue with ease.

“We are going to grow our business on the back of relationships, product development and demonstrations and supporting our customers,” Elvin says. “We want long-term product development, but at the same time, we want to come out with a distribution model that is global but also has stability and strength long-term.”

To answer these ambitions, Snorkel has invested heavily in its business, especially on North American soil. It’s on the heels of opening a brand-new manufacturing and office facility in Nevada that will span 200,000-square-feet across 19 acres of land; it tripled its North American sales team in 2015, and aims to add another six staff members pushing the staff to 25; and, Elvin says, Snorkel has been adding nearly one engineer per month to its team, tripling (again), its engineering workforce.

“Over the next couple of years, not only will we grow our customer share, but we will grow our market share,” Elvin says. “We’re not relying on market growth, we’re relying on new relationships. [In 2016], the market will flatten out from where it is, and there will be slight growth, which is substantially better than it was a few years ago. We are cautiously optimistic for 2016.”

“Las Vegas is an interesting place to call home,” Elvin laments, “but it’s our head office and you couldn’t do it any other way.”

Saying that, however, Elvin travels nearly 50 percent of his time, visiting distributors, sales companies and new developments. In the past 12 months, the company and its majority share owner, Don Ahern, have seen Ahern Deutschland open; new sales personnel hired in Singapore; Snorkel UK staff expansion; and it is in the middle of opening Ahern Chile and preparing for Snorkel China.

“I’ve only been to Australia once since I moved [to Las Vegas],” Elvin says. “These new spots are opportunities. We are taking it step-by-step.”

In order to support the growth, the company has invested for global product launches over the next year. The main focus is to launch products for the North American market, Elvin says.

“With our new head offices in Henderson, that’s where most of the new engineering has taken place, so it will benefit the North American market first and the rest of the world following.”

Coming out of its Kansas manufacturing facility recently was the redesigned electric scissor line, which customers got a close look at during The Rental Show in 2015.

“The scissor response has been very positive,” Elvin says. “People really do like the fact that we stood back and had a look at what the scissor could be, and then really put some different engineering solutions into the product line.

“In the last 12 months, after the original [electric scissors] were launched, we took all the feedback customers provided and incorporated those changes, so the product you see today is incorporating as much product feedback as we could.”

Following the company’s investment into, and launch of, the newly engineered electric scissors, its next step has been a focus on its mid-sized booms, which were also on display at The Rental Show 2015 and 2016, and this year’s Bauma.

At Bauma, Snorkel’s new mid-size 660SJ boom was on display, which is now in production and ready to order.

The Snorkel 660SJ delivers a 66-foot maximum platform height, with 58-feet, 6-inches of maximum outreach, and it can lift up to 600 pounds. It is the largest model in the new family of four telescopic boom lifts, which will also include the Snorkel 400S, 460SJ and 600S models.

The company’s next launch will be the 600AJ, which Elvin hopes to have at ConExpo 2017. After that, another articulated, a 620AJ, will make its debut.

“What we’re really trying to do is go back to what we were and reinforce the fact that we’re true to those values,” Elvin says. “People like our robust machines, which is back to traditional Snorkel values.”

The company is also working on its line of Snorkel-branded telehandlers. When Don Ahern purchased the majority share of Snorkel, it seemed only fitting that a telehandler line would eventually come to fruition, being that Ahern’s Xtreme Manufacturing produces robust telehandlers ranging from compact to mammoth machines.

Snorkel and Xtreme, however, only have one crossover machine; the “baby telehandler,” Elvin says of the 5919, which has 19 feet of lift height, 11 feet of forward reach and 5,900 pounds of capacity.

“Parallel to that, we have separate engineering projects from the ground up for telehandlers,” he says. “We are developing a Snorkel telehandler line to compete against Genie and Skyjack. To be honest, our original wish was to use Xtreme telehandlers as a base, but we’ve decided ground-up engineering is the best approach.”

The company will not produce a full line, but instead will focus on the smaller end of the telehandler spectrum. “If someone wants anything over 12,000 pounds,” Elvin notes, “it will then cross over into Xtreme [territory.]”

If all goes to schedule, the line should launch toward the end of 2016.

Also in development is a big boom.

When asked if he had any comments on how big the big boom might be, Elvin just laughs and says, “No.”

However, Ahern told ALH last year that a large boom, destined to be higher than 126 feet, was in the works, along with an even larger boom that would have 150 feet of working height. Ahern said the boom could be launched in 2016, however, we will just have to wait and see since Elvin is tight-lipped about the details.

An obvious question to Elvin was that of how Ahern Rentals plays into the Snorkel business. While the two companies are separate entities, “there’s no doubt Ahern Rentals is an important customer,” Elvin says. “From a Snorkel point of view, we want to be seen as a supplier to independent rental companies, and Ahern is a larger independent company. We don’t want to simply be an Ahern supplier, however; we want to supply many companies.”

And that’s where Snorkel’s strategy remains near and dear – with the independents, and then some.

“We want to supply any player who needs access equipment,” Elvin says. “It doesn’t necessarily have to be a rental company. With the sales footprint that we now have, it allows us to do more cold calling and showing who we are while building relationships.”

Elvin and his team have dissected the North American market into logical sales territories. Every sales representative has now been outfitted with a Snorkel-branded EZ-Loader truck, which allows them to take a scissor or small electric boom to do product demonstrations.

The company also has the ability to manufacture ‘smartly.’ With a “happy” supply chain, combining traditional and new suppliers, Snorkel is taking the opportunity with its new changes to make sure it is still using the correct supply channels. North America is also utilizing more global supply channels, as well.

With the corporate facility in Nevada taking shape, initially, Xtreme production will be shifted from Las Vegas to Henderson.

“As models got bigger and bigger, we needed more space,” Elvin says. “The new space will also allow us to incrementally increase Snorkel production there, as a compliment to Kansas production.”

With the additional space and manufacturing capacity, the entire staff will “increase substantially,” Elvin says.

The next two years are therefore on track to tick many ‘new’ boxes for Snorkel – from facilities, growing global footprints, ‘big’ product developments and more, the company is on course to continue to grow – and evolve.