The International Powered Access Federation (IPAF) has confirmed its new presidential team, with Karin Nars, managing director of Dinolift, officially invested as the federation’s first woman president during its 2022 AGM this month. 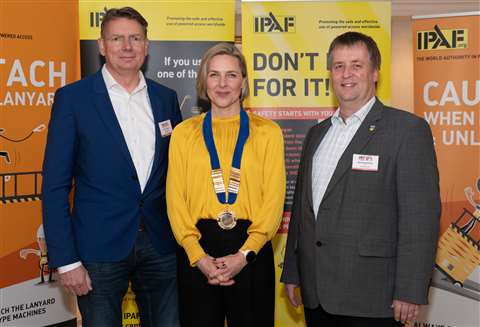 At the AGM, which took place in London on the same day as the IAPAs and IPAF Summit, Karel Huijser, general manager and VP EAME at JLG, was confirmed as IPAF’s deputy president and Kai Schliephake, managing director of Partnerlift, became vice president.

Turner now takes over from Nick Selley of AFI-Uplift in the ex officio role of immediate past president on the IPAF Board, with Selley stepping down from the board. Jacco de Kluijver, VP of sales and marketing EMEAR at Genie, who was seconded as an IPAF Board member at the end of 2021, also had his new position officially confirmed at the 2022 AGM.

In his outgoing address, Turner said that in the early months of his term in office, “my main objective was to help the federation and support its members to survive through the initial stages of the pandemic and the worldwide lockdown,” adding that he had been impressed by how many of the key objectives he set the federation had been achieved, including a new focus on sustainability, embracing new technology, adapting more IPAF training into eLearning and VR applications, as well as delivering the ePAL mobile app, and progressing IPAF’s engineer and technician roadmap and apprenticeships. 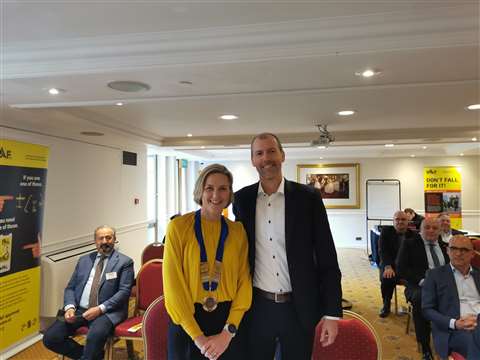 “In addition to all this and I believe an IPAF first, we have given back to our members. In 2021 a 25% discount was applied to all members’ accounts on renewal of their membership, with training numbers surpassing expectations towards the end of 2021 all training centres worldwide were given an additional rebate per candidate trained during the year,” he added.

“Finally, I’m delighted to announce that the excess surplus created in 2021 will be used to hold the training application price for training centres for 2022. This means with the operator safety guide now included in the app, the cost per candidate is reducing – giving IPAF Training Centres a £2.50 saving per delegate if they go digital, meaning the cost of training is effectively the lowest that it has been for more than seven years.”

Focus on the future

In her inaugural address as IPAF President, Karin Nars commented, “After a trying two-year period, the world is currently facing a new challenge – the repercussions of which no-one can predict. Therefore, we should take pride in being a global organisation committed to promoting safety and cooperation.

“Our purpose from the very beginning has been to make sure that everyone who works at height, at the end of each working day, returns home safely to their family. Our purpose also encourages us to work together and make a difference that goes beyond our industry. IPAF will continue to move towards greater digitalisation – especially new ways of sharing knowledge and information.

“The pandemic has shown us the importance of having a strong digital presence and creating digital processes – from training and eLearning to how we interact with our partners. This work includes the further development of our ePAL app, which is a valuable tool for interaction with machine operators with important safety messaging.

“The accident reporting system is now receiving input from more countries and in more languages; with a direct link via the ePAL app on an operator’s mobile device, we can put even greater focus on the reporting of near misses and the prevention of serious accidents. This, I believe, is an excellent example of how data can be harnessed to increase awareness of work practices that compromise safety. Safety is a joint effort based on respect and openness – everyone stepping up to improve it should be heard.

“I take special pride in being the first woman elected President of IPAF. Lasse Godenhielm, my father, who was the President of IPAF at the turn of the millennium, always encouraged me to pursue my dreams and work hard. I never doubted I could reach my dreams because I was a woman. That’s why I would like every girl and young woman who wants to work in our industry to be offered that chance and to receive the support to do so. I believe IPAF is in a good position to promote equal opportunities for all – and I aim to use my voice as president to promote such a programme.” 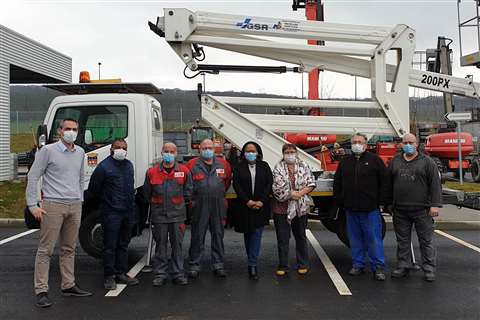