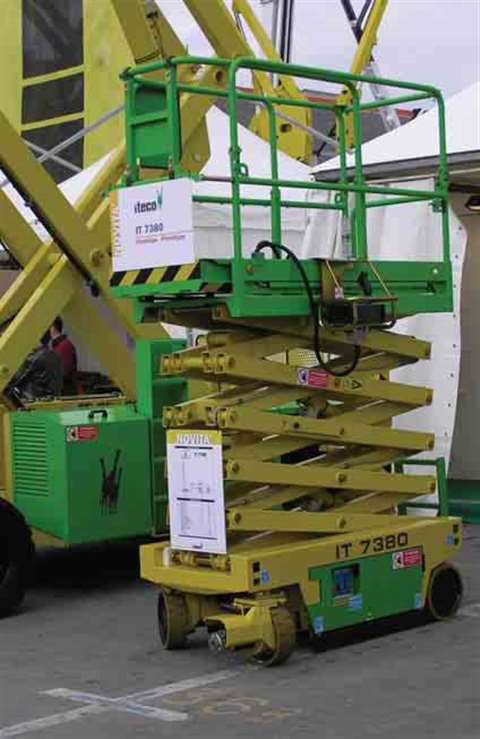 Almost two years into the dispute over the fitting of load sensors to aerial platforms, the European Commission has invited platform manufacturers to submit details of where they believe their machines have been improperly stopped from working by Italian health and safety authorities. Over the past two years as many as 200 new booms and scissors have been effectively banned from operating in Italy by inspectors who believe the machines do not comply with the EU's Machinery Directive because they do not have load control systems.

The invitation-issued at the October meeting the EC 98/37/EC working group on machinery, chaired by the commission's Martin Eifel-comes after almost two years of disagreement between the Italian authorities and aerial platform manufacturers and users, and follows an 18 month campaign by the International Powered Access Federation (IPAF) and FEM (European materials handling federation) to have the problem investigated by the Commission.

Access International understands that two non-Italian manufacturers and one group of Italian manufacturers submitted dossiers before the end of 2004, and these are now being considered by the Commission, although this is a process that is likely to take up to four or five months.

Mr Eifel, who works for the European Commission's enterprise directorate general, would not comment on the details of the case but confirmed that manufacturers and others were free to send complaints to the commission; “If someone doesn't like the way the Machinery Directive is applied they are welcome to contact the commission, and the commission will look into it.”

Tim Whiteman, managing director of IPAF, said he welcomed Mr Eifel's statement and advised those affected to submit material either directly to Mr Eifel or to IPAF. “The confusion surrounding the use of access equipment in Italy is costing users and manufacturers a lot of money and seems to go against the principle of creating a single European market”, he told AI.

One major manufacturer told Access International; “We are presenting our case to Martin Eifel. We want it discussed in Brussels.” Manufacturers affected in the dispute include Genie, JLG Industries, Iteco and Airo Tigieffe, with some understood to have as many as 40 machines standing idle. At least one has not been paid for its machines.

At the root of the problem lies the Italian interpretation of the EN280 standard. The draft version of prEN280 did not include a requirement for load control, while the current harmonised EN280 does. ISPESL, the Italian health and safety body that sets policy, has taken the view that platforms certified using the draft prEN280 and entering service in Italy between June 2002 and June 2003-that is, after the EN280 standard was finalised but before it was officially published-should be fitted with load control systems and be re-certified. Since the official publication of EN280, manufacturers have redesigned and re-certified their machines incorporating load control systems.

The dispute, which has been hampered by the fact that no official Italian translation of EN280 currently exists, prompted both IPAF and FEM earlier this year to write to Mr Eifel at the commission. FEM's aerial platform product group chairman, Manitou's Sebastien Braud, wrote; “We feel that the actions of the Italian government are in direct contravention of EC Directives and are costing the MEWP industry substantial sums. These costs are actually being borne by all those companies involved in manufacturing, supplying, marketing and renting a very wide range of products.”

The problem has occurred throughout Italy but is understood to be worst in the Emilia-Romagna region of northern Italy where ASL regional inspectors have been withholding official approval of machines when they first enter service. All machines should be inspected by the regional authorities before they start work, although limited resources mean that in practice inspections are carried out on just 5% of machines.

IPAF and FEM argue that Italy is stopping legitimately CE-marked machines from working and that it has not following correct European Union (EU) procedures. Under EU regulations, CE certificates can only be withdrawn by a Notified Body. Where the 'state of the art in technology changes, Notified Bodies are obliged to review the certificates they have issued and either approve or withdraw them and re-certify the machines after changes have been made.

It is understood that the Notified Bodies involved have reviewed the relevant certificates, as required, and they have not been withdrawn. Access International contacted one UK Notified Body, Powered Access Certification (PAC), but the company's managing director, Paul Adorian, declined to comment.

Critics also point out that Italy, if it believed that the machines represented a safety hazard, should have invoked the EU safeguard option. This would then require a ruling by the commission, which, if upheld, would mean that all the relevant machines throughout the European Union, and not just those in Italy, would need to be modified and re-certified or withdrawn. The safeguard clause was successfully used earlier this year by the Swedish health and safety authorities over the design of the gate on several vertical mast platforms.

There is no indication that the Italian authorities are currently planning a safeguard action-if such an action were successful it would impact on thousands of machines operating in Europe.

Mr Eifel travelled to Milan, Italy, in December to attend the Italian authorities annual meeting on enforcement of the EU's Machinery Directive. At this meeting he reiterated his invitation for manufacturers to submit complaints to the Commission, but also made the point that the Commission has no power in law to interfere with how member states organise their market surveillance and inspections under national law. He also made a point of praising the Italian authorities for the way that they police the implementation of the Directive.

IPAF has meanwhile recently hosted or attended several meetings in Italy during which the problems have been discussed with ISPESL and regional inspectors, and Gerhard Hillebrand of IPAF Italia says progress is being made; “IPAF has been pushing for action on this issue for a long time-both internationally through the EU and locally within Italy. We now have clear acceptance of the problem and that is a most important step at arriving at a solution.”