The sixth edition of GIS, the Italian trade show for the lifting, handling and heavy transportation sectors took place at the PiacenzaExpo exhibition centre 5-7 October. 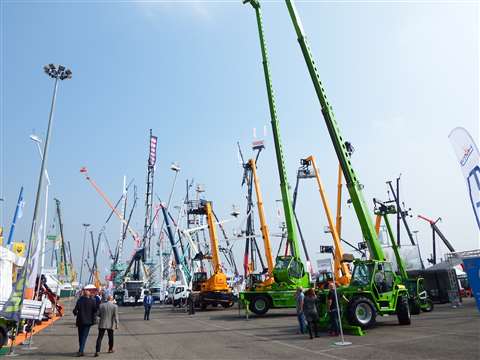 Organisers of show said visitors were expected to reach 10,000 over the three-day run, a considerable increase on the 2017 edition, which had around 4000 visitors. The expanded show, which was around one third larger than the previous edition, comes at a positive time for the Italian market as it starts to pick up.

There was plenty to see at the show, with a number of new machines making their first appearance.

Platform Basket launched its first telescopic tracked platform at the show. The 30T is designed to be lightweight at 4,300kg and with dimensions of 0.88m wide x 1.95m height. The machine also offers an interchangeable winch option with a lifting capacity of 250kg, compared to the baskets safe working load of 230kg. Lithium is also available as a bi-energy option with diesel.

The manufacturer says it plans to expand its telescopic range in the future, including a 43m machine set to be launched next year.

Platform Basket also announced at the show it launched a new rail mounted platform, the RR14 Evo 3/400, which is the third version of this 14m working height machine. Its main feature is four wheel steering, making it easier to manoeuvre on to the rail track. Its speed capabilities have also increased and it can now reach 18km/h on the track. Promox, the manufacturer’s dealer in the UK, is the first customer of the updated machine, which is already certified for the UK, Australia and Northern Europe and is about to be certified for Italy. 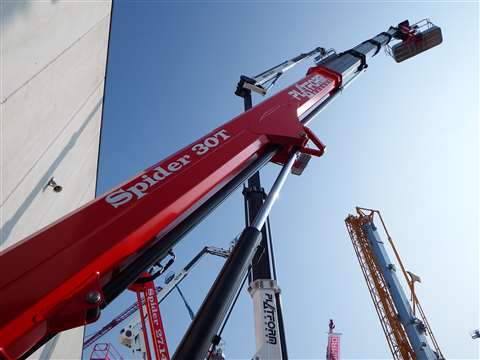 Back on the subject of tracked platforms Palazzani was showing its production-ready version of the Ragno T2330. The 32m working height machine was shown as a prototype at APEX in May. It is the fisrt articulating machine in the company’s range and was designed for the up and over capabilities required to work on top of buildings.

The machine also includes a new electric system for energy-saving and has a CANbus distribution system. This new high-tech system will be placed on all other machines as they are introduced including the telescopic models.

New on the Cela stand was the 19m working height DT19 mounted on a Nissan Cabstar. The machine has a 10m outreach and 230kg the basket. A hook is optional across the DT series and is classified for material lifting. The model represents the smallest in the range and is the first time a 19m working height machine has been included in the company’s equipment line. 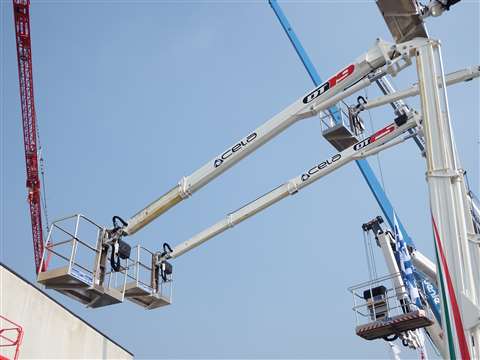 Oxley introduced its first underbridge, truck mounted unit. The machine has unique capabilities requested by Harbour and Ship Services, which is the first customer of the machine for working in negative positions with ships. The company also required it for underbridge work.

The 18m working height machine has the ability to go over a 3m barrier and has a double jib, as well as the basket turning by 360 degrees both sides.

Ruthmann Italia was showing its Bluelift SA11 for the first time in Italy, having launched the machine at APEX this year. The company also plans to launch a more than 30m version by the end of the year. The so-far unnamed 3X will have a double pantograph boom with the basket set between the two pantographs. It will weigh 4.3-4.4 tonnes.

Imer was showing the IM range, with the IM 1180 E prototype on its stand. The 13m machine complements the 15m working height IM 1380 E and a new range of rough terrain scissors. There are six versions across the series. Although the range is designed to be modular with options of two-wheel drive, no stabilisers or oscillating axle. The maximum 400kg capacity can be increased to 600kg with the stabiliser option. Width is 1.8m, while length is 3.2m, and there is a 1.5m basket extension.

Paolo Pianigiani, business development director IMER, said the Italian market is picking up. While he says IMER is seeing double digit growth in the country he says Italy is growing a little more slowly.

“It is picking up from the North downwards. The recent acquisitions by Kiloutou and Loxam in Italy proves that the market is interesting. These French giants entering Italy shows that growth is there.”