JCB has entered the powered access market with the promise of a comprehensive global product range. Ahead of the official launch, Euan Youdale was given an exclusive product preview and spoke with the managing director of JCB Access, Richard Butler.

When a company the size of JCB announces it is entering a new product sector with 27 models and a battle plan to become a major player in the near future, the world tends to sit up and take notice. This will certainly be the case for the access sector, as it learns of JCB’s intentions to do exactly that. 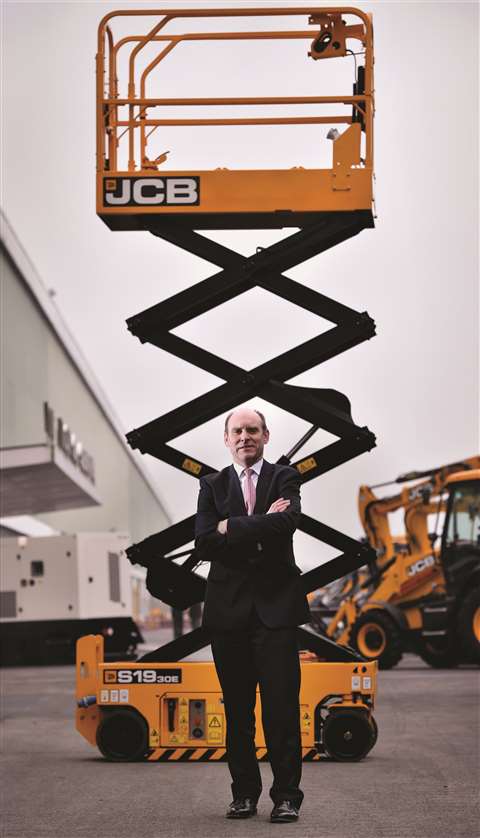 Apart from an extensive range of construction equipment, bringing in a revenue of £2.34 billion (US$2.91 billion) in its 2015 financial year (the most recent figures available), JCB is also a global leader in telehandlers, having sold its 200000th Loadall unit last year, and marks its 40th anniversary of the range this year. It is celebrating the landmark with a new range of basket attachments, allowing operators to work at heights of up to 20.3m. And now the manufacturer is taking its access offering one step further – or 27 steps further – with the launch of JCB Access, officially announced on 1 February at its headquarters in the UK.

JCB’s entry into access has been one of the most closely guarded secrets the industry has ever known, despite being in the planning for two years and with a good number of AWP industry experts taking up roles at the new division, to complement the company’s existing expertise. One of them is Phil Graysmark, Genie’s former vice president of sales and marketing for the EMEAR region, who left the Terex AWP division after eight years towards the end of 2015.

Speaking to AI in the days leading up to the launch at JCB headquarters, the division’s managing director Richard Butler, comments, “There has been a bit of chatter in recent weeks but not a lot. No one has seen the product at all and nothing has slipped out on social media - that is brilliant for us. The product has been around, but we’ve hidden it well and some earlier product was maybe not painted yellow.”

The company is using the strapline ‘Access: The Revolution’, “Because we firmly believe we are going to start a mini-revolution in this sector. It will shake it up a bit, we know that.”

One might be surprised that JCB waited until now to dip its toe into the access pool. Mr Butler explains the decision was customer driven. “They had been saying to us for a number of years, ‘there is one area of the business that you don’t deal with, and it’s the access sector’.

“It was a logical extension; we had been busy growing our product range over the years in the construction and agriculture sectors but the noise escalated - the number of customers who said, ‘you should be in this sector because it has so many synergies with products you already supply’. It was a no-brainier in reality, and we set about it.”

According to Mr Butler, JCB’s customer base also thinks there is room in the access market for another major manufacturer that can offer global support. It would seem JCB thinks so too; it estimates the world’s access equipment sector has grown considerably, from U$3 billion during the depths of the financial crises in 2009, to $6 billion three years later in 2012. The annual market now stands at more than $8 billion, with some 130000 units being sold each year, it believes.

“We have some pretty strenuous targets and objectives,” says Mr Butler, “What we should say is, we aim to be a credible player in this sector and how that translates, we will wait and see. We have had a lot of interest from the people we have shown the product to - it’s fair to say we have promises when we launch.”

JCB’s existing close connection to the world’s major generalist rental companies, through its extensive distributor network, numbering 770 in 2,200 locations, will help pave the way to success. It also believes this same network will help develop the access industry in parts of the world where it is emerging or still largely unknown. However, an introduction to specialist access rental companies will also prove crucial to its success, particularly, as Mr Butler calculates, up to 95% of access sales go into the rental sector.

“We see ourselves as being attuned to the rental market. Although, as we developed the project, we realised there was a set [of rental companies] that we didn’t know. There are those big companies that have general fleets and then there are the specialists in access equipment; so we felt we needed to talk to them, and let them now about JCB and what we offer. So the likes of Phil and others that we have brought in are giving us the help to meet customers we have traditionally not known.” 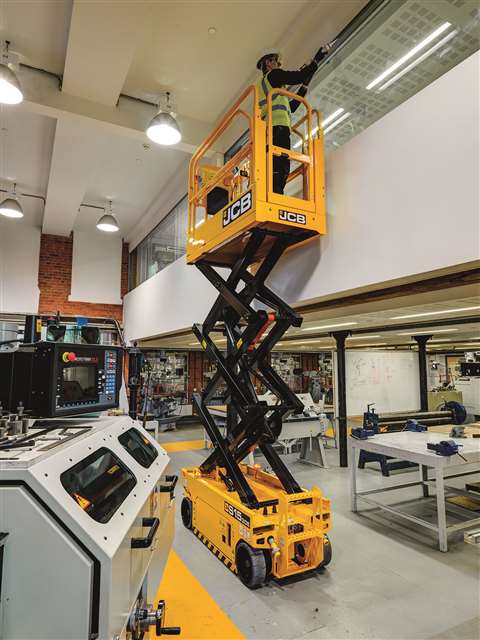 Word of JCB’s new venture will be further spread thanks to its attendance at major exhibitions this year. Apart from the appearance of a couple of scissor units at the UK’s Executive Hire Show in early February, the principle launch of its products to the public will be at The Rental Show in Orlando, US, at the end of February, followed by the presentation of its first boom, a 50 ft diesel-powered model, at ConExpo in Las Vegas, in March. The company will also be at APEX in Amsterdam, during May, although officially its stand is in the International Rental Exhibition (IRE) area, which runs alongside APEX.

Yet, Mr Butler reiterates the company’s distribution as its chief advantage, including around 70 dealers in India, for example, allowing it to provide effective 24-hour, local service provision. “Our strength is our long-established distribution, often family owned, which gets up in the morning and thinks JCB.

“If we look at India, for example, we have a very strong network, and it’s ideal to bring a new product to market.

Mr Butler adds, “Safety is becoming an important factor in developing countries and it’s being led by tier one contractors, in the main, that are becoming international-based businesses, and if you are tier one contractor you have your own health and safety policies that must be adhered to.”

Laying the groundwork for growth in the likes of India, which Mr Butler believes will follow China as the next major market, demonstrates just how seriously JCB is taking the access sector. Speaking about China, he comments, “Per capita the opportunity is double America, it has to be. Not in the next decade, but I absolutely see China becoming an important market for access as we go through the next two decades.

“Then you we will see the move to Africa. It will take time, but access will become the way of doing things.”

China is important for JCB in more ways than one; as all its AWP products will be manufactured in China, at least for the foreseeable future. It has set up a production line in an existing factory in the country. While the factory is not owned by JCB, it has designed the products and owns their intellectual property rights. “We are using internationally, industry-recognised components throughout the range, which will be sourced globally as well as bringing JCB innovation,” the company says, “JCB is also in the process of entering into a partnership with the business where the dedicated production line has been installed.”

There is no doubt of the company’s intent to produce premium, global products. “What has probably helped us, is the [European] EN 280 standard and [US] ANSI standard are coming together. They won’t be quite the same, but the standards will be very close. “Our view is we build to the latest EN 280 standard, make sure we meet the new ANSI standard, so then if you look at the market - 50% being North America, 30% Europe - for 80% of the market we have a global product definition that we can sell.

Mr Butler adds, “Safety is of paramount importance, so why would we put a product that has less or is inferior into a market such as India - we want to set the standard where others would be judged.”

Will the company extend its product line even further in the foreseeable future? The answer is, of course, yes, but not, it thinks to higher or lower platform heights. “In terms of the product range we will deliver [with the 27 products] it covers between 80%-85% of the general rental fleet”, says Mr Butler.

“I would say the future may be different power sources. We know we must reduce cost of ownership, fuel consumption. So, I would say, in the next iteration, we will likely see some form of hybrid technology come through.”

By the end of 2017 JCB’s 27-strong range of access platforms will include: 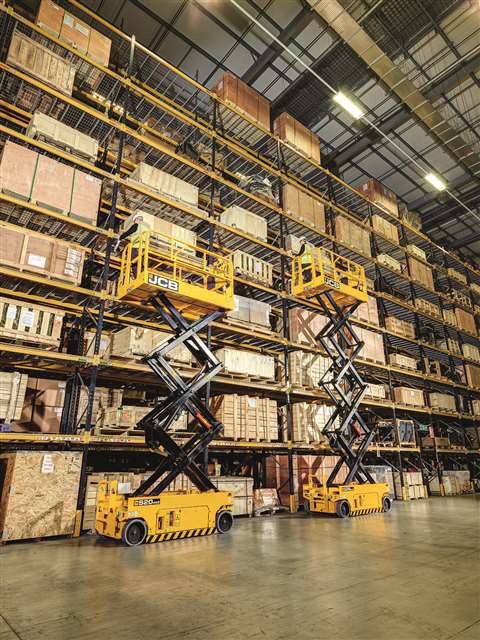 Each of the nine models are driven by electrically-powered hydraulic motors, protected by heavy-duty steel plates, similar to the plates on the innovative JCB Teletruk forklifts. All metal components, including the chassis, have been EPD dipped, providing automotive-grade protection against corrosion. Maximum gradeability of the scissors is 25%.

For added rigidity the bottom pin on all nine machines is mounted directly into the chassis, while the sliding pin is supported by wear pads - a technology transfer from the Loadall products. All external limit switches have metal covers, so they are tamper proof and protected from falling objects. The scissor packs have been designed using full pivot bosses, another technology used on other JCB machines.

On all nine electric scissors, the bottom pin is mounted directly into the chassis, while the sliding pin is supported by wear pads - a technology transfer from JCB’s Loadall products. All external limit switches have metal covers, so they are tamper proof and protected from falling objects. The scissor packs have been designed using full pivot bosses, another technology used on other JCB machines. This design increases surface bearing area of the pin, which in turn improves the stress distribute through the structure.

For operator comfort include, the entry handle is designed for a continual motion for entry and exit. Inside the platform there are six harness securing points for work across entire structure and the extension deck is roller operated.

The platform control cradle allows the operator to positon the controller anywhere on the guard rail. All machines have rails that fold down by roving the retaining pins.

For the operator, there is an automotive-style foot pedal for platform extension. Machine diagnostic are designed to be simplistic with fault codes delivered through the controller. To make fault finding easier each electrical circuit is fused.

The four articulated booms will have platform heights of 49ft (14.9m) to 81ft (24.6m). All four models will be offered with 4-wheel-drive and 2-wheel steer, delivering up to 40% gradeability and a maximum stowed driving speed of up to 7km/h.

The AJ50D diesel model, to be presented at ConExpo, is powered by a Perkins engine, while the other three articulated models and all telescopic models use the JCB by Kohler engine, used in many of its compact machines. The engines all meet Tier 4 Final emission standards. Load capacities range from 227-250kg.

They will be joined by a 45ft (13.7m) platform height AJ45E electric powered articulating boom model in the third quarter. The electric model has 2-wheel-drive and 2-wheel steering, with up to 30% gradeability.