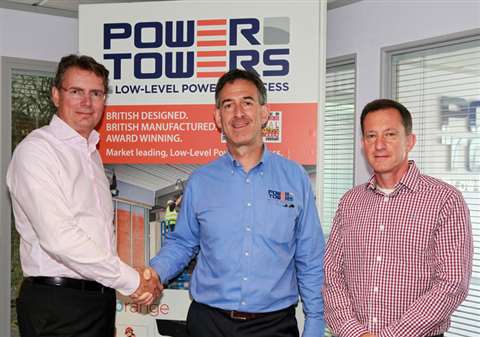 JLG Industries has acquired a 100% shareholding of low level access specialist Power Towers Ltd in a deal that will see the UK company retain a degree of independence under its new owner.

Founder and managing director Brian King, as well as other long-standing staff, will continue at the business. The financial terms of the deal have not been disclosed.

The deal was completed around lunchtime on Monday following more than a year of discussions between the two, and announced to employees of both companies today.

The Leicester, UK- based company - which has produced around 12,000 units since 2007, including the Power Tower, Power Tower Nano and Pecolift – will fill a product gap for JLG in the low level access niche, adding to its existing Toucan and vertical mast ranges.

Karel Huijser, JLG’s vice president for Europe, Middle East and Africa, told Access International; “We understand that we have a gap in our portfolio in the low access area…customers told us to be in the space, and they nudged us towards this decision [to acquire Power Towers].”

He said Power Towers’ track record of innovation and the people behind the company were key to the deal, and added that JLG would be extremely careful with its new acquisition; “We were looking for a pioneer in the low level access space…you can be arrogant and say, ‘we can handle this ourselves’, but it is the people behind the product that are important. Product innovation is a very important part of this deal and will stay, and maybe we can accelerate that.

“We’re going to be very careful with all the decisions we make…Power Towers has been so successful, we want to make sure that continues.”

Brian King, who described the two companies as a “perfect fit”, said he and fellow director and designer Mark Richardson, as well as Mr King’s wife Sandra, would remain at the business “for at least five years, maybe longer”. He said the jobs of the company’s 28 staff were secure as was the future of the two manufacturing facilities run by the company in Leicester.

He said the acquisition would allow Power Towers to grow faster than it would otherwise do. “We can plug products that we’ve got - and products in our heads - into the best distribution network in the world…It would be nice to see Power Towers products in all corners.”

The company has been very successful in expanding the market for low level access in the UK, the Middle East and parts of Europe, and JLG will give it the opportunity to expand that influence.

Mr Huijser said the acquisition was a “European play” but with global opportunities; “We’re jumping on a growing wave [for low level access] – we can only help that wave grow bigger.”

JLG first approached Power Towers during the IAPAs in Windsor in March last year, with Mr King then meeting JLG president Frank Nerenhausen during the APEX show in June. “We began to feel very comfortable with the JLG people”, said Mr King, “The deal wouldn’t happen if we weren’t.”

There are unlikely to be rapid changes at Power Towers, with the next 60 to 90 days being used to evaluate issues such as distribution; the use of the Power Towers brand; and technical items such as ANSI specifications. Mr Huijser said, for example, that it was difficult to say when the Power Towers products would be available in the US.

Regarding distribution, Mr King said that there was no plan to close Power Towers’ successful Middle East business; “In some areas, there will be no change to distribution.”

For the time being, Power Towers customers will notice little difference; “From day one – today – if they want to order a product, they go to Power Towers”, said Mr Huijser, “Over time we will think about how we are going to do it, to make the best use of the brands we have.”

Brian King said the key thing about the deal was JLG’s understanding about what had made Power Towers successful, and that these ingredients would be kept; “To create the success we’ve had to date, there has to be product and market focus.” That will not change, he declared.