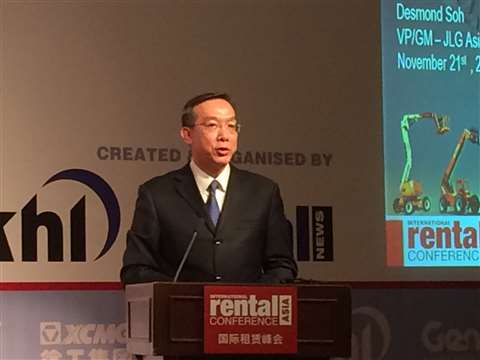 Desmond Soh, vice president and general manager - Asia, at JLG Industries, speaking at the International Rental Conference Asia, estimated the number of construction workers for each AWP in China is 16000, while in the US the figure stands at 12 units per worker.

Yet, he also believes there are up to 106 new AWP manufacturers in China, although most of them are very small local scissor producers.

These figures reflect both the potential for aerial work platforms in China and the interest in them.

One of the drivers of growth, apart from the well-documented need for safety regulations and an established rental model, is the ageing population in China and, therefore, its shrinking workforce, amounting to "a seismic shift in labour trends," said Mr Soh.

According to Mr Soh, the population of China will drop 21% by 2030 and construction labour rates are going up on average 10% a year.

He added that the cost efficiency of using powered access was also being realised in the country. Compared to scaffolding Mr Soh said the cost saving of using AWPs instead was around 35%.

The figure is based on actual projects carried out in China in which labour, construction time and equipment rental were measured as factors. It was found that whilethe costs of equiment rental was higher than the use of scffolding, the labour and time savings easily outweigh it.

While rental is in its infancy in Asia, Mr Soh pointed out that existing Asian rental companies are seeing great growth. For example, Mr Soh quoted Access International figures from its Access50 listing of the world' biggest access rental companies, in which China's Shanghai Horizon went from 52nd position to 38th in the matter of a year.

Expanding on the long-awaited exponential growth of the access equipment sector in China aalong with other emerging nations in Asia, Mr Soh, said, "Its not a case of, will it happen? It's when it will happen."