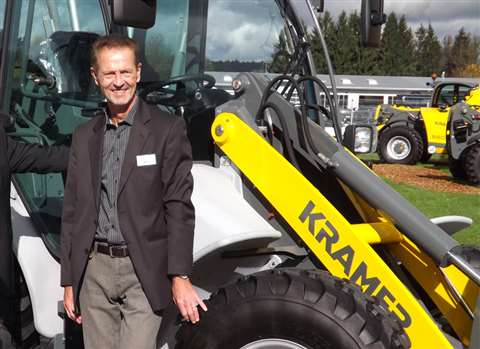 German manufacturer Kramer, part of the Wacker Neuson group, has presented new telescopic handlers and wheeled loaders at a dealer and customer event at is factory in Pfullendorf, Germany.

The Kramer 5 Series comprised seven models in total with bucket sizes from 0.35 m3 to 0.95 m3. A new cabin layout has also been developed across the range with a greater emphasis on comfort and ergonomics. Kramer said the new wheeled loaders would be available from March 2015.


Karl Friedrich Hauri, Kramer managing director, said the 5 Series machines were particularly well-suited to the rental market, with their simplified and robust designs.

“The Rental market is a very important customer segment for us,” he said. “It is also a growing customer segment, with different growth trends in terms of machinery depending on national cultures. The trend is for growth in both Eastern and Western Europe.”

Kramer said around 10% lower fuel consumption could be achieved with this engine, compared to its previous set-up, as well as 17% higher torque.

The premium line machines offered high-performance Powerflow hydraulics as an option, as well as optional all-wheel, front-wheel or crab steering.

Kramer said the new models boasted all-wheel steering, among many other features, with tight turning radii from 3.75 m to 4.35 m.

All the new wheeled loaders and telescopic handlers met EU Stage IIIB exhaust emissions laws – the regulations that started coming into force in 2012.

A new set of even stricter off-highway diesel exhaust emissions laws, known as Stage IV, started to come into force at the beginning of 2014, but Mr Hauri said the company was taking advantage of European flexibility allowances to introduce the its new Stage IIB machines.

These legal provisions allowed manufacturers to continue to place a certain number of machines powered by older engines on the market.

“We are using the flexibility rules,” Mr Hauri said. “The emissions laws have placed a lot of strain on manufacturers – an enormous capital drain. The flexibility laws mean that we don’t have to offer Stage IV machines straight away.”