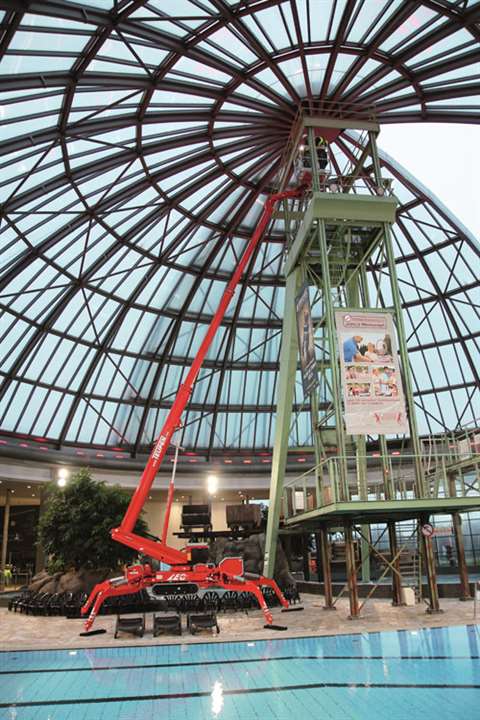 Teupen Maschinenbau hosted its Demo Day in November at its company headquarters in Gronau, Germany.

Apart from being able to test products at the factory, customers had the chance to learn more about its manufacturing principles.

During the event, the manufacturer presented its complete product line and presented the first in a new series of medium height machines, the telescopic Leo19T.

“Over the past two years customers have continually asked us to do something new in this height segment”, says Jens Meyer, area sales manager for Northern Germany.

The new Leo19T has little in common with its predecessor of the same name, first launched in 2008. As with the Leo21GT and Leo24GT, high-strength steel telescopic technology is used. The new machine has a 250kg basket load and a 13.5 m outreach. At 80kg capacity it reaches 14.5 m.

Following their modular design principle, the machine has a 0.99m wide chassis like the Leo21 & 24GT. “In the future, these models will be almost identical up to the turret,” project manager Matthias Verrieth said. “This way we can use the same capabilities over a wider set of products, especially when the lift is set up in the field.” With its automatic levelling system the Leo19T can be set up on a base with a height difference of 1.2 m and has various stabiliser set-up positions.

In addition technological advances like the home function was shown; which brings the boom into its resting position automatically along with the new memory function. This latter feature means any point in the working diagram can be saved and returned to at the push of a button. Furthermore, all functions are available centrally from the control unit.

New features also on show included the 25 litre fuel tank, a large 50 litre storage box and the new easy-to-use service and emergency controls. “We thought that the emergency system should work with a simple 1-2-3 principle on one well-arranged control panel,” added Mr Verrieth. “With an electric lowering system that is powered by an additional battery we also included an additional safety feature into the standard configuration of the lift. By doing this we were able to make the hand pump obsolete.”