Innovation and expansion is the philosophy at Multitel Pagliero. The company’s co-owner Renzo Pagliero tells Euan Youdale about his plans.

Multitel Pagliero was founded in 1911 and is now enjoying its third generation of the Pagliero family with brothers Renzo and Sandro Pagliero now at the helm. Representing the fourth generation are five children, now grown-up and working for the company. 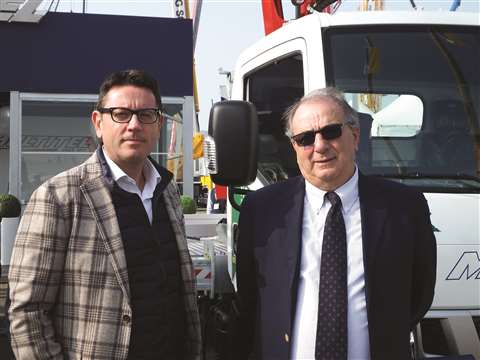 The company has been investing considerably in its production facilities and in the last few years has been bringing back some of the components that have been subcontracted. “We have always been a full manufacturer. We are the only one, the others assemble and sub contract. We want to have everything here in our factories - that is the only way to improve quality and reduce the costs to be competitive,” says Renzo Pagliero, who co-owns the company with his brother Sandro.

The company has a long history of innovation, starting from 1911 and then became a platform manufacturer in the 1960s by adding an operator basket to its truck mounted cranes. Lately, in the 1980s, platforms took over from the cranes business.

It was a decade before that in 1970 that it launched its first 3.5 tonne truck mount, which now contributes 90% of the revenue of the company.

Last year Multitel Pagliero produced a little more than 1,000 units and this year that will reach 1,100 units, with the plan being to increase output to 1,500 units, which is the current capacity of its five facilities in its home town. One of them a new 6,000 square metre facility for mounting 3.5 tonne machines, plus a training centre has just opened this month (November). In total the company has six plants, five in Manta and one in Saluzzo.

“The climate is good or better than it was two or three years ago. We have more share in the market and improved it over the last five years,” explains Pagliero.

Pagliero’s three main markets are France, where it is market leader, its home country of Italy, where it has been improving its market share, and Germany in that order.

One of the company’s ambitions is to expand its export markets. That is where Roberto Marangoni comes in, Multitel Pagliero’s new export sales director. He took over from Jerry Kist at the end of May. Kist had been with the company since 1998 but announced he is reducing his duties due to ongoing health problems, although he will stay on in a less intensive role.

The latest move for the company is into Denmark and Spain with new dealers. “Although we have sold some units in Spain, mainly to Loxam, now we are trying to enter the market with a new dealer and we will see what will happen,” says Pagliero.

On top of the direct presence in France and Germany the company has dealers in Spain, Switzerland, Austria, Romania, Turkey, Belgium, Holland, Denmark, Sweden, Norway, UK and Poland. The strategy is to expand in countries where it is present, with Eastern European nations being one of the company’s major targets. 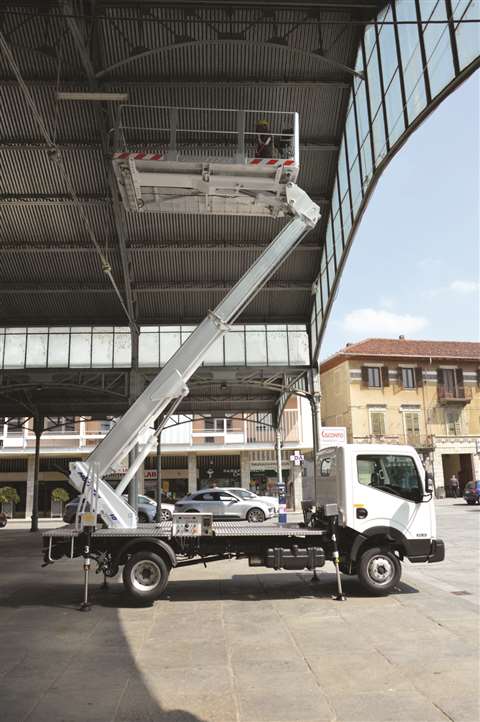 While Marangoni, who joined the company from JLG, where he was senior sales director Southern Europe, will naturally look to unlock new markets, a major aim is to consolidate current markets.

“I hope the Italian market over the next four or five years will improve compared to recent years. We are ready to take a share of that,” says Pagliero.

Its share of the market in France is more than 50%, and in the rental market that increases to more than 60%. Pagliero’s close relationship with France is reflected in the company’s proximity to the French boarder and the area’s close cultural ties.

“We decided many years ago to open our branch in France and sell direct to that market. Also, Everyone in the company and our region speaks French – it’s much easier to deal with a country when you speak the same language.”

He adds, “The product has been very well accepted on the French market, mainly by the rental companies.”

Of course, the company is well-known for its aluminium units. There is a plan to expand this And to try to increase height on its 3.5 tonne. “The main reason [for introducing aluminium] was we understand the future of the market for truck mounts would be on 3.5 tonne trucks. The volume is there.

“When we introduced the aluminium booms, the maximum height at that time was 13m-14m and immediately we were able to be at the 16m point. Now we have the experience of aluminium that we have passed to other parts of platforms, like the subframe and jibs.”

Does Pagliero see a stage where all the sub-frames and booms are aluminium? “At the moment we are not looking at more than a 3.5 tonne subframe. Maybe in the future five or six tonnes, but on the bigger machines you have greater dimensions, it is not possible to use the aluminium profiles.”

“The market of 3.5 tonne trucks in Europe is not the same everywhere. The only difference is some countries prefer straight line platforms like Germany, others want articulated platforms, like Italy. Countries like France, there is a mix of the two units.”

The demand for 3.5 tonnes in Germany and UK started only after 2000. “The two biggest markets for 3.5 tonnes are Italy and France but Germany and the UK are growing up. In 10 years Germany will probably reach the same volume, the UK in 15-20 years.”

Where there is a bigger difference is in the big machines, “Today the Italian manufactured products are good for the south of Europe. German products are good for Northern Europe. We have problems selling our big machines to north Europe but on the other hand the German manufacturers don’t sell many units here in Italy. The philosophy is not the same, it is much more difficult to develop a range suitable for each country.”

And for Pagliero specifically, “For example, on big machines we are very strong here in Italy. We share the French market with Ruthmann, but we are very weak in Germany.”

Larger truck mounts, will generally see the same level of sales in the future. “The market for big machines suffered here in Italy and in France after the financial crises. It’s also a very cyclical market, more than for the 3.5 tonnes.”

This year, however, is looking good for the big trucks. “We are selling much more than last year or the years before here in Italy, and in France for the last two or three years. This year also the age of units means there is replacement.”

There are plans to launch a 76m working height truck mount on a five-axle truck at the Intermat exhibition in Paris, France, in April next year. Although, greater working heights are not on the agenda. “We are less interested than the German manufactures and Finnish manufacturer, we concentrate on what the Italian market asks for. At the moment the demand over 70m is there but is not very high.”

Returning to the core 3.5 tonne products, there are plans for a 16m hybrid machine. “The demand in France is good for this type of unit and we feel confident.” The 160 Alu Hybrid has a 16.3m working height. 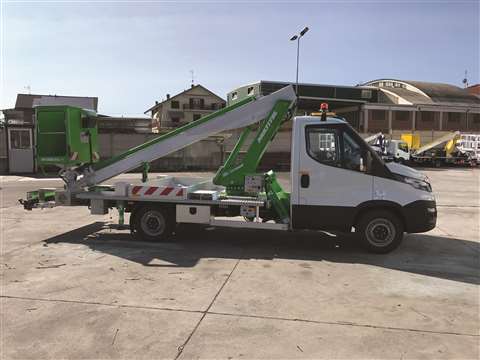 The problem with going over 16m to 18m is the weight of the power pack. “At the moment the maximum height is 16m and maybe 18m in the future. But I should think there will be new materials.”

Certainly, the long term future of these new technologies is bright. “The future for me is the full electric but we need to wait for the full development. At the moment you have the first developments in cars, for commercial vehicles probably we will need to wait some years. And we are working on that, as are probably other manufacturers.”

A recent launch is the MS100 telescopic aluminium boom with a generous platform of more than 6 square meters (3.3m x 1.85m) and a working height of 10m. With a platform capacity of 400kg it also includes up to 500mm of lateral movement secured by hydraulic cylinders. This extra movement make the MS100 even more versatile and the ideal solution for working in tunnels, road lighting work and even airports/aircrafts maintenance activities.

The lift is mounted on 3.5 tonne Euro 6 chassis with an overall width of 1.9m, including stabilisers. The unit has up to 6m working height without outriggers and can drive with the operator in the basket and one in the cab.

Thanks to two hydraulic motors the machine can travel at speeds of up to 5km/h while elevated. Automatic stabilisation and automatic home boom repositioning provide quick set up.