Nationwide MD calls on AWP industry to raise its game 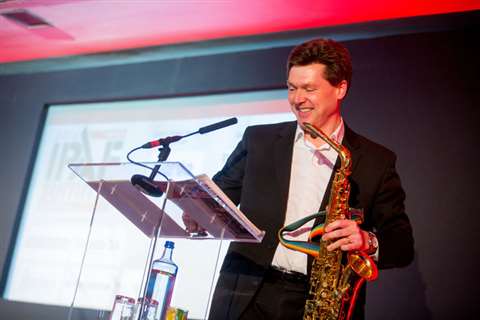 “Give safety time and make sacrifices; if resources are under pressure and you need to make sacrifices, you sacrifice something else other than safety,” said Jeremy Fish, managing director of Nationwide Platforms, to an audience of about 300 at the IPAF Summit on 17 March 2016 in Madrid, Spain.

Playing a short jazz interlude on his saxophone, Mr Fish went on to illustrate how discipline, commitment and passion – principles that apply to music – should be applied to safety.

Safety protects revenues, he explained, citing cases of how UK companies have coughed up a total of £82 million in fines for safety breaches over the last five years, with several companies eventually ceasing to trade. “What do you do to avoid compromising safety if you have to economise? Whatever it takes,” was his advice. “You don’t have to focus on equipment to be safe; you can focus on behaviour. Safe behaviour doesn’t involve cost. Speak up when you witness something dangerous. Question, take ownership, share incidents and near-misses.”

Mr Fish challenged IPAF and its membership to stop paying lip service to safety. Noting that more member companies should be reporting accidents involving mobile elevating work platforms (MEWPs) at IPAF’s incident database, he said, “My message to the IPAF membership is this. If you are really serious about safety, then why is it that so few of you have submitted near-miss reports to the IPAF accident reporting database since its inception four years ago? This isn’t information sharing. This isn’t learning. This isn’t being serious about safety. I think that a number of you shouldn’t be here and should leave IPAF.”

He also proposed that IPAF should raise standards by auditing new and existing members, “My message to IPAF is this. If you are really serious about safety, why do you let any MEWP provider organisation join? Are you more interested in membership numbers and fees or driving safety standards? I think we should be auditing new and existing members, insisting that they uphold certain standards – standards that are worthy of the IPAF badge. Let’s not tolerate mediocrity and second best. My view is that if we can do these things, then safety surely will be our number one priority, in both good and bad times, and it will transform our industry.”

In the discussion following the presentation, Mr Fish acknowledged that companies and organisations face the challenge of treading a fine line between safety and revenue.

IPAF CEO Tim Whiteman said that IPAF is focused on safety and that it would be looking for avenues to push the health agenda. The Federation would continue to work with the relevant authorities on speeding up accident investigations and learning from them.

Mr Fish’s talk was just one of a host of top-class presentations, among them from Brad Boehler, president of Skyjack, and Pedro Torres, COO at Riwal. Skyjack’s Brad Boehler discussed efforts being undertaken by manufacturers and the UK Health & Safety Executive (HSE) to create a new international standard for controls on MEWPs, while Riwal’s Pedro Torres provided strategies to break the cycles in the rental business, which he predicted would become hyper-cyclical.

The next IPAF Summit will be held with the International Awards for Powered Access (IAPAs) on 4 April 2017 in London Wembley, UK. Watch for event details at www.iapa-summit.info