New AWP from Absolute E-Z Up 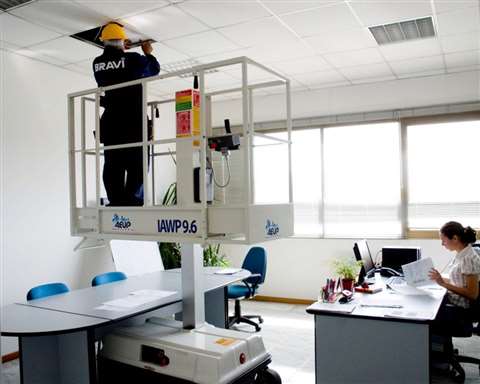 Absolute E-Z Up has "Americanized" the Leonardo units built by Braviisol in Italy and has started selling its IAWP-9.6 aerial work platform to the North American market. The lift features a zero turning raidus and 397 pounds of capacity on its dual extension decks.

"It's [a safe unit] because my platform capacity is totally unrestricted," he says, "where anybody else in a scissor, as soon as they have somebody in the platform, they have weight disbursed and hanging out over the machine."

The unit can be transported and operated by one person but does allow occuprancy for up to two people. Twin 12-volt batteries allow the machine 250 lift cycles, or what the company says is about seven miles.

The IAWP-9.6 weighs a total of 1,212 pounds, allowing it to be used on a variety of surfaces, and it can also be managed on up to a 35 percent grade. It also comes with a 10-5-1 warranty, which includes 10 years on mast and cylinder, five years on all components and a one year non-prorated warranty on batteries.