New products and plans at SAIE 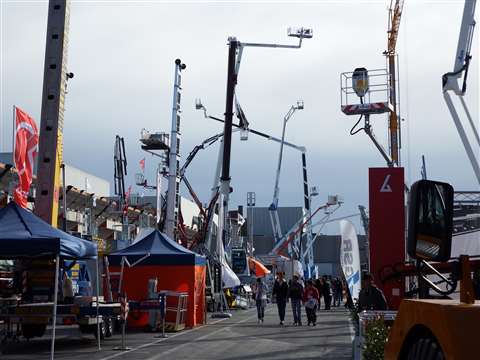 The four-day SAIE exhibition in Bologna, Italy, last week was a shadow of its former self, with two of the once main outside areas used for parking this year. However, access equipment was well represented.

The reduced size of SAIE reflected the access market in Italy, which is still struggling to find growth in a stagnant economy. As Fiorenzo Flisi, owner of Socage explained, at its height the company achieved a €22 million turnover in Italy, which reduced to €4 million in 2013.

This was partly due to a concerted effort in the export market, with a turnover increase of €12 million to €24 million in the markets outside Italy during the same time period. However, as Mr Flisi joked, "If I had known the crises would be so long I would have thought again about buying Socage". Mr Flisi acquired Socage in 2009 from knuckle boom crane manufacturer Fassi.

Innovation continues at Socage, despite the downturn, with a new assembly and service centre in Tunisia. The aim is to offer truck mounts to a growing North African market that requires trucks for applications including the erection of street lighting, which is in its infancy in the continent. The manufacturer has also launched its first van mount and the new X Factor stabilisation system.

Palfinger Italia extended its range at the show with a new X and XE version of its Smart class truck mounts. The 20 m working height P200 TXE was introduced at the show and the 17 m P170 TXE will be launched by the end of the year.

RAM, part of the group of companies including Bluelift, was showing another new van mount, the Gemini R200, an upgrade of the Gemini 20, with increased basket capacity to 250 kg and more outeach to 10.5 m.

French manufacturer ATN was at the show for the first time in its bid to increase its export market. The company confirmed Italy was a difficult market and predicted another three to four years of slow sales in ther country.

President of Oil&Steel Luigi Fucili explained its exports make up 90% of revenue. PM Group, which includes Oil&Steel, is being acquired by US-based Manitex. Mr Fucili says the deal will complete by the end of this year or early 2015 and will allow PM to extend its international programme. He said the new group of companies would work together to produce more modular products suitable for the international marketplace.

The show ran 22-25 October. See more about SAIE in the November/December issue of AI.