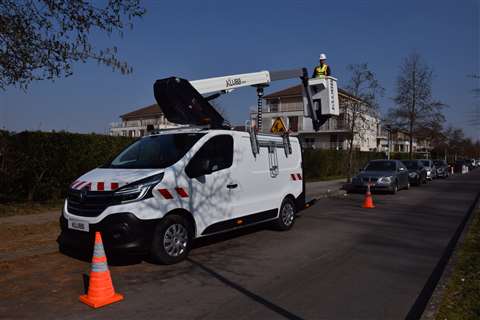 Part of the manufacturer’s ‘Light’ range and mounted on Renault’s New Trafic van model, the platform has a working height of 11.40m and an reach of 6.80m.

Klubb said the model “combines interior comfort and all the technical innovations of the New Trafic”, such as the Easylink multimedia system and a folding centre back seat.

According to Renault, this means drivers can connect their laptops and allows them to use the van as a mobile office.

While the compact model is primarily designed for work in urban areas, such as telecommunications or CCTV sector projects, the KL21B also has a “reinforced payload” capacity.

This means it can still “transport all the material and equipment required for work at height”, said Klubb.

The KL21B also incorporates a newly designed main arm, that is made from High Limit Steel Elasticity. According to the manufacturer, the high performance material means the model’s structure is both light and strong, and benefits from increased service life.

”We are proud to work in partnership with Renault for the launch of the New Trafic” declared Julien Bourrellis, President of Klubb.

“We have been bodybuilders approved by the manufacturer since the program was created. We make it a point of honor to convert the new models of our manufacturer partners as early as possible, in order to have perfect control of the bodywork at the time of marketing. It is a guarantee of quality for our customers. “