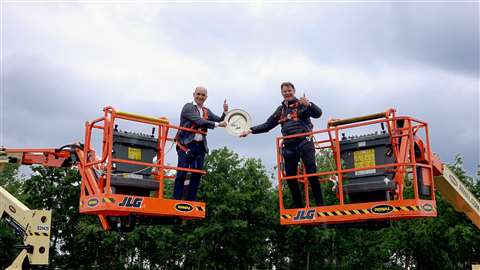 JLG Industries is celebrating its 25th anniversary with Riwal as its official distributor.

The relationship was originally established in 1986, with the first purchase of JLG machines by Riwal for its rental fleet. In 1995 the relationship evolved and Riwal became an official distributorship for the Netherlands.

Over the years, Riwal has introduced many of JLG’s innovations to the Netherlands market, such as JLG’s ultra booms, hybrid machines and most recently the Lithium-battery operated EC Booms and hi-capacity models.

The relationship has undergone much change over 25 years. Karel Huijser, general manager and vice president of JLG EMEAIR commented, “Riwal and JLG have come a long way since we started working together. We have seen the market mature and continued to develop and innovate the rental market. We appreciate the shared values of safety, innovation, and customer focus between both companies. We are looking forward to continuing our relationship in the future and congratulate Riwal with this milestone”.

In support of its international growth strategy, more recently Riwal extended its JLG distributorship in Poland, in 2015, Croatia, Slovenia, Montenegro, Bosnia and Herzegovina, in 2018. Most recently Kazakhstan (2019) was added to the list of distribution areas, in 2019.

Pedro Torres, Riwal CEO added, “The long-term relationship between JLG and Riwal is much more than that of a supplier and a customer. It is all about partnership, there is plenty of trust between both parties. I am very proud about the 25th anniversary of the distributorship and I look forward to a successful continuation of our cooperation.”