The trend for micro and compact scissor units is growing in the workplace and therefore in manufacturers’ latest product lines too.

The world of powered micro scissor lifts are being brought to a wider audience, as their safer, more ergonomic qualities compared to more conventional working at height solutions are becoming realised.

Advances in technologies are also making these lifts more viable in terms of cost and the environment. Electric drive is becoming a mainstay of the industry, although hydraulics are still an option. Lithium batteries are playing an increasing role too, however, as a universal solution this is still some way off. 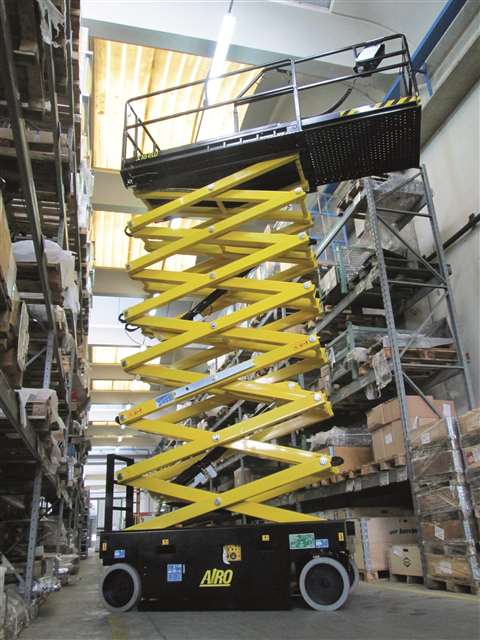 Stefan Weber, export manager at Airo, describes the company’s compact line as“different”, rather than niche. As the company points out the machines are hydraulic drive and designed to be robust.

While there is a trend to direct electric drive and lithium batteries, which the company offers with a range extender on other models, the company is remaining in the hydraulic drive, lead acid battery camp for its compact units.

The Airo micro line incorporates three models of 7m, 8m and 9m working height - the XS7E, XS8E and XS9E. A unique feature of the range is that its maximum capacity is available across the extension deck.

All themodels boast a 1.5m extension deck, with the full platform capacities available across it. The most recent addition is the 16m working height X16EW, with 90°steer and 250kg capacity for two people in the basket.

Returning to the subject of drive options and batteries, Weber says, “Given the business nature of compact scissor lifts, being considered a commodity, the high cost impact of electric drive or a lithium battery packs on one side, the long amortization and the risky business on a rough construction site, on the other, voids immediately all obvious advantages of using a lithium-ion battery pack.”

Optional on Airo’s compact lifts are traction batteries, and there is increasing demand for maintenance free AGM batteries from its customers in countries with high labour costs.

The models are completed with proportional lift, drive and steer and efficient speed control of the power pumps. Snorkel is currently offering compact scissor lifts with a choice of hydraulic or electric drive, so that the customer can decide the requirement for their application.

Shown as a prototype at ConExpo in 2020, the S3210P is designed for in and outdoor slab applications or indoor areas which have a wind loading, such as during the early phases of a construction build where windows or doors may not yet be installed.

Measuring 0.81m wide, it is effectively an outdoor rated version of the manufacturer’s S3010P pusharound mini scissor lift, with a wind speed rating of 12.5m/s, a lifting capacity of 240kg, and weighing just 470kg.

It can be easily pushed when stowed between work areas and carried in a passenger elevator. Snorkel is now researching the new 4m platform height scissor lift segment, with the intention of adding this to its line of electric scissor lifts.

Elvin adds that through the use of direct electric drive, compact scissor lifts are now being used in industrial and clean room environments, such as in the medical and food sectors.

“However,” as Elvin goes on to explain, “Direct electric drive is more expensive than a hydraulic drive system which is limiting widespread adoption by manufacturers, as the compact scissor lift is highly competitive.”

Lithium-ion batteries are also an alternative power option to lead acid batteries to power compact scissor lifts. But will they be more widely used in smaller scissor lifts? 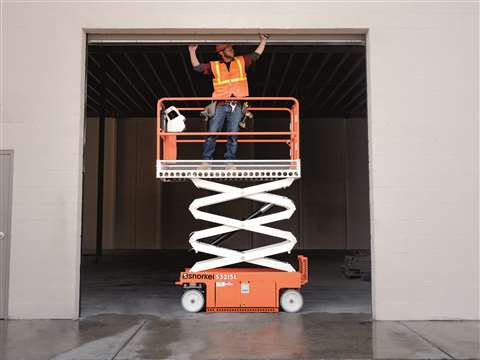 Elvin believes its is a possibility to extend duty cycles, eliminate battery maintenance, and more closely match the charging habits that we are familiar with, such as on mobile phones.

“While battery cost may reduce widespread adoption currently, it could be a welcome solution in certain sectors, such as retail, industrial, clean room, and hospitality environments.”

The latest GS-1932m and GS-1432m micro scissors from Genie are an example of how the company’s approach to low level access is evolving.

They use Genie’s E-Drive system, which the company says helps reduce the total cost of ownership while boosting productivity. The GS-1932m and GS-1432m feature a stowed height that is low enough to fit through a doorway with its standard fixed guardrails.

Christian Dube, product manager at Genie, says compact scissor lifts is an area where we are seeing a strong push towards electrification. “That’s because the technology has reached the point where it can deliver better jobsite performance, reduced maintenance, and a lower total cost of ownership.”

The next step will be to continue evolving this technology, including areas like lithium batteries. “But,” says Dube, “Just like the first steps toward electrification, it has to be the right technology at the right time and purposefully designed for the equipment it is meant to power.”

Echoing the point that micro scissors are not just aimed at typical low level access applications such as the replacement of ladders, Dube says they are also a good choice for other jobs where you would use a standard sized scissor lift. 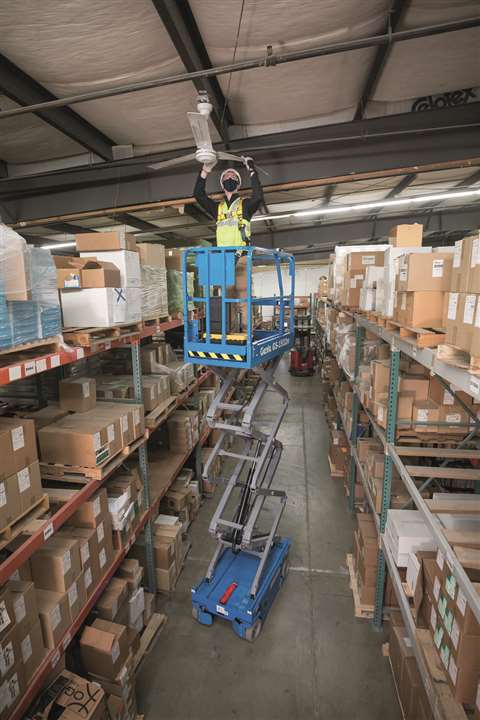 With a 227kg capacity, both the GS-1932m and GS-1432m are rated for two workers and feature a 0.81m wide platform and 0.6m extension deck, ensuring good access to a large range of work locations.

Scissors for multi-purpose use

As facility owners and jobsites continue to emphasize fall prevention, use of ladders is frequently being discouraged, confirms Mirco Negri, JLG’s senior product manager EMEAIR. As a result micro scissors are finding uses in the likes of data centres, while also being rated for work in outdoor applications.

“Demand for these types of lifts continues to grow, especially as the trend towards urbanisation increases, resulting in less open space and buildings getting taller and narrower.”

Negri Continues, “This creates a greater need for products that have a small footprint, are lighter weight for use on sensitive flooring, can fit into elevators and can be moved between floors for finish and fit-out construction work or ongoing maintenance.”

For example, these ES series models haveonly six hoses, a significant reduction over hydraulic drive machines, which reduces the chance of leaks. Both have a platform capacity of 227kg and width of 0.76m.

On the electric drive discussion, Negri explains they are gaining favour. “For example, fully electrified models offer an eco-friendly solution thanks to having no hydraulics or oil – these lifts are leak-free and operate quietly, making them a preferred piece of equipment for work in environmentally sensitive areas, as well as in hospitals, schools, libraries and office buildings where noise restrictions exist.”

Their compact footprints also feature, what JLG says is a unique zero turning radius for work in tight spaces. For JLG that also means a lightweight machine that provides operators with ample space for tools and materials.

For example, ES1330L and 1530L models feature variable tilt functionality which enables a larger work envelope when operating on slight slopes. JLG’s micro scissors are powered by maintenance-free AGM batteries, with no lithium option available at the moment.

Sinoboom has gone down the lithium route with its latest products, those being the 0607SE and recently upgraded version of the 0407SE.

The 0407SE now features an increased maximum platform height of 4.5m and has been changed to front wheel drive. The 0607SE on the other hand is more lightweight in comparison to its sister 0608SE model.

With these new products Sinoboom says it can now supply Chinese customers with a full series of machines featuring lithium batteries, and the overseas markets will follow next. 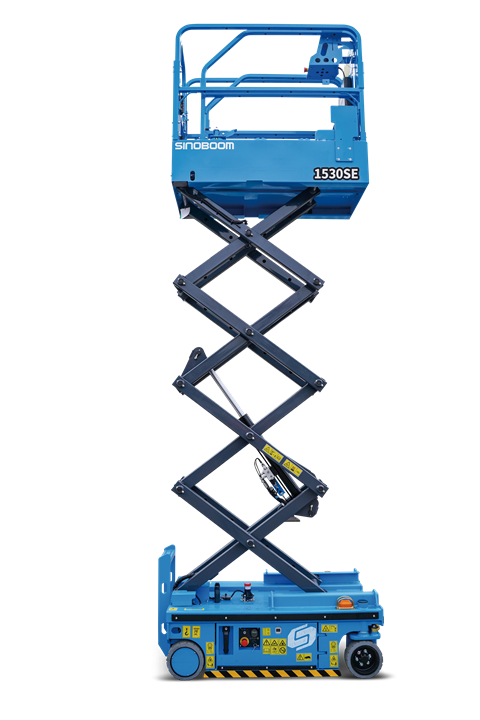 According to Sinoboom these items are also uniquely equipped with permanent magnet motors, commonly found in cars like the Tesla model 3, and are more energy efficient than excitation motors by about 20%.

As Peter Peng, Sinoboom’s product manager explains, the products adhere to the trends in the category of being lightweight, narrow and with easy manoeuvrability.

“In a competitive micro and compact market, we have been developing features to meet specific customer requirements. Narrow machine width and light weight are key factors to help optimise transportation logistics and costs – a major consideration in the equipment rental industry.”

Peng adds, “Reduced maintenance requirements also help rental customers to turn equipment round between hires more efficiently, which helps to make these a more cost-effective solution for working at height.”

Sinoboom scissor lifts come with several features as standard, such as bumper strips which help protect decals during transportation and daily use, and all equipment is treated with an electrophoretic primer which protects against corrosion.

Dingli is also taking the direct electric drive route with its Mini Scissor Series range. The company just added a new model to make three in the series. While the products come as standard with lead acid batteries, lithium is offered as an option.

It joins the two other models in the DC electric drive series; the 5.6m working height JCPT0607DCM and the 7.6m JCPT0708DCM.

Dingli points out that with a lower purchase price, the rental cost for mini scissors remains almost the same as that of standard scissors, therefore making the rate of return higher.

Scissor lifts as an alternative for ladders 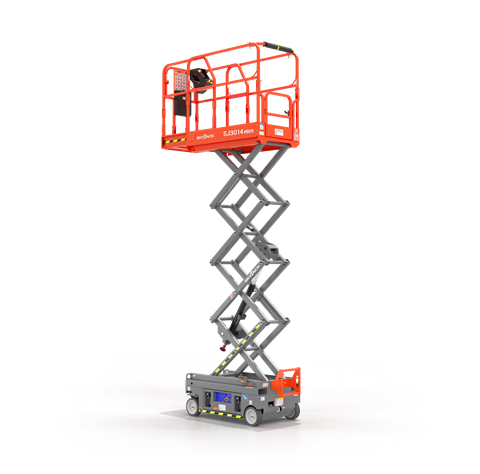 It comes with sealed maintenance free batteries and DC electric direct drive, with a focus on productivity.

And, with a focus also on light weight, at 820kg, it is designed to tackle maintenance tasks in commercial and industrial applications on sensitive floors.

Rafael Bazzarella, product managerat Skyjack, says, “With these attributes these micro scissors can start to replace some traditional means of working at height by getting to locations that current machines are not used.

“If it is just as easy, and safer, to access the location with a micro scissor instead of a ladder then the micro scissor will be used.”

As a result, micro scissors are more commonly found in the workplace.

“Most can fit in an elevator and are light enough so they won’t damage delicate floors. As awareness grows, I believe the cost benefitis related more to safety and efficiency rather than monthly rental rate.

On the subject of lithium and electric drive combinations; while the SJ3014 does not use a lithium battery, looking forward the potential does make sense, says Bazzarella, as it adds up to efficiency and lower cost of ownership.

“From the end users’ point of view, the machine will be quieter and last longer on a single charge. For the rental companies it means less maintenance is required.” 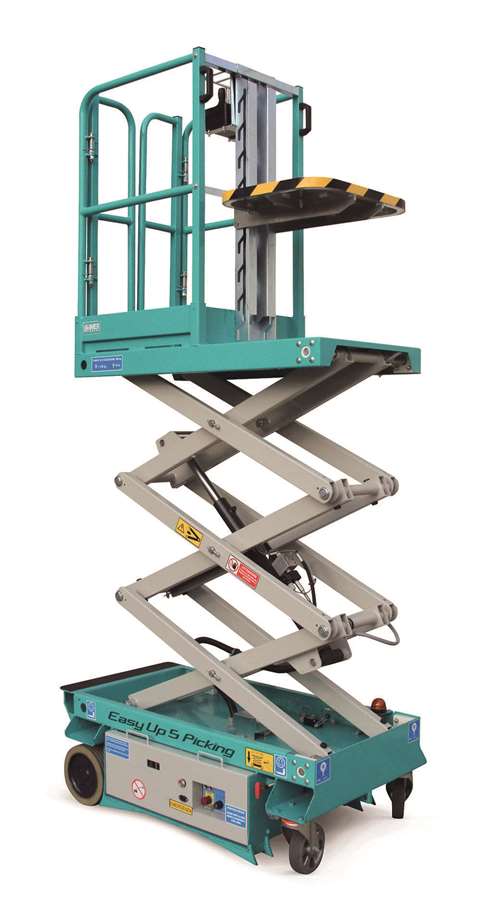 Imer will launch compact electric drive units this year. The two new scissors will be released by July this year; those being the IM 4080 and IM 4980.

Their main features will be a 6m and 7m working height, respectively, a capacity of 230kg, a platform extension of 0.6m, electric steering and weight of less than 800kg.

They will complement Imer’s most recent micros in its Easy Up series, offering low weight and very compact dimensions, with a height of 5.2m. Three models are available; pusharound, self propelled and picking, with tray.

Noteworthy in its soon to be launched products is, indeed, the electric steering system, which Paolo Pianigiani, commercial director of Imer’s Access Division, says complies with the green demands of today’s industry.

“The new micro scissor lift models are occupying a market segment that until now saw the use of heavier and more bulky machines or pusharound systems. The search for technologically advanced solutions has certainly made it possible to optimize costs.”

Imer has been manufacturing direct electric drive units since 2010 and has optimised its systems to fully make use of batteries.

“The batteries are part of the balancing weight of scissors lifts. Lithium batteries may be suitable for longterm utilisation requirements because of the charge they receive, thus requiring additional counterweights.

“Today, evolution of electrification is opening new frontiers which may be even more evolved.” 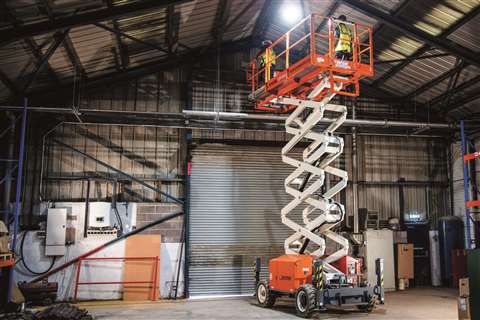 Electric scissors - battery advancements
Electric scissor lifts have long been powered by lead acid batteries, but a new energy source is currently making its way into the industry. ALH reports.