Snorkel has commenced production of its new outdoor rated push-around mini scissor lift, the S3210P, at its Vigo Center assembly facility in the UK, and Snorkel UK has delivered the first eight units to UK rental company, APL. 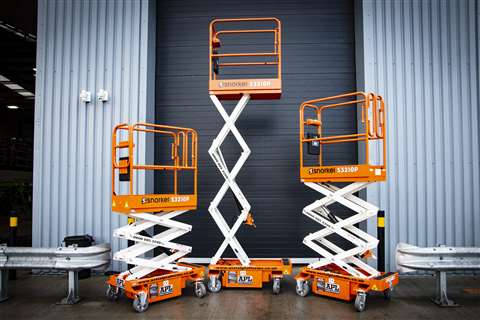 Shown as a prototype at ConExpo-Con/AGG 2020, the Snorkel S3210P is designed for low level work at height in outdoor slab applications or indoor areas which have a wind loading, such as during the early phases of a construction build where windows or doors may not yet be installed. Measuring 32 in (0.81m) wide, the S3210P is an outdoor-rated version of the popular Snorkel S3010P push-around mini scissor lift, with a maximum working height of 15 ft 10 in (5.0m), a lifting capacity of 529 lbs (240kg), and weighs1,036 lbs (470kg).

Developed in response to customer demand, the Snorkel S3210P offers the same easy operation and serviceability as the indoor-rated unit, yet is rated up to a maximum wind speed of 28 mph (12.5m/s). Equipped with an auto-brake system as standard to prevent movement when the lift is raised, the S3210P can be easily pushed when stowed between work areas and carried in a passenger elevator. With saloon-door style entry gates, non-marking casters and simple push-button controls as standard, the Snorkel S3210P is built tough for a long working life in construction, rental and maintenance environments. 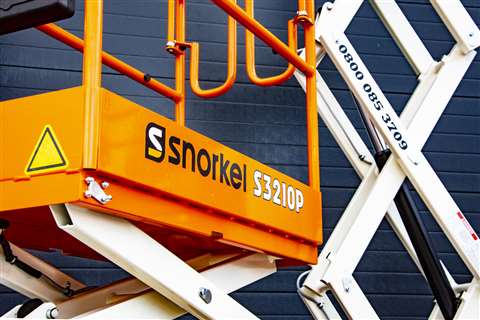 The S3210P entered production in November 2021 with the first eight units were delivered to APL in early December as part of a larger investment in low level access. The total order also included ten Snorkel S3010P indoor rated push-around scissor lifts and ten Snorkel S3010E self propelled mini scissor lifts. The units were handed over to APL by Jon Plaskitt, area sales manager for Snorkel UK.

Headquartered in Leigh, Greater Manchester in the UK, with additional locations in Carlisle and Newcastle, APL is a leading privately-owned single source MEWP rental company with more than 800 aerial units in their fleet. It has more than 30 years of industry experience and operate their own transport fleet. The company has expanded its business with a Super Fleet division specialising in the largest MEWP models and offer a range of services to MEWP owners, including LOLER inspections.

Phil Wong, finance director of APL explained the decision to invest in the Snorkel S3210P; “Low level access continues to grow in popularity with various trades now preferring these units over traditional products such as ladders and scaffold towers. However, we have come across multiple occurrences where a push-around scissor lift would be the ideal piece of equipment for the job but we have not been able to specify them due to wind loads. We were excited to see Snorkel introduce this outdoor-rated version and expect them to become popular with our customers who span a wide range of industries.” 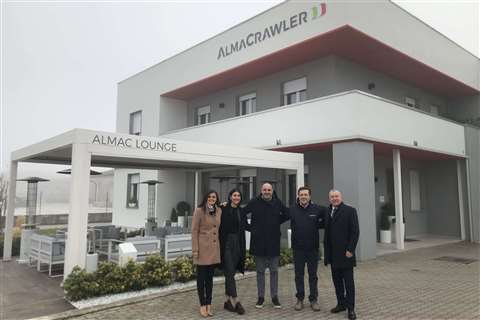