The spider lift sector is a hive of activity with challenging projects a given for this type of equipment. This feature provides insights into a range of spider lift projects, carried out around the world and their unique challenges. 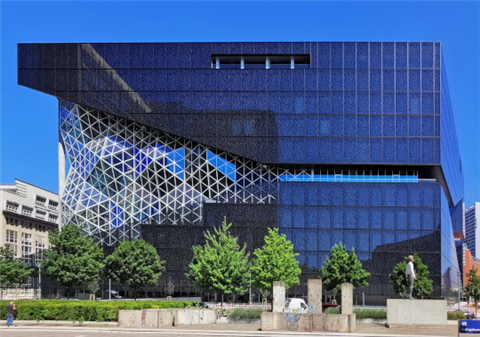 Falcon was called upon to provide its 420S model for the construction and ongoing maintenance of the majestic Axel Springer office building in the heart of Berlin, Germany. Photo supplied by Falcon Lifts

Falcon was called upon to provide its 420S model for the construction and ongoing maintenance of the majestic Axel Springer office building in the heart of Berlin, Germany.

Accommodating more than 3,000 people, the 80,000 square metre building is based on a design by renowned Netherlands architect Remment Lucas Koolhaas.

Built by German construction company Züblin AG, the new building consists of eleven floors above ground, two basement floors and an accessible landscaped roof area. A central component of the design is a 40m high atrium lined with terraces.

The 420S was delivered for the completion of the building and used for final finishing and cleaning before the handover to the end-user.

The wheel-mounted 100% electric model has a combined DC battery and AC 400 V hook up, and has specially designed outriggers that can be fixed to the floor, for set up in restricted load areas, where enhanced reach is required.

The main challenges for the Falcon lift are the restricted floor loads and thereby travel path restrictions, along with restricted areas for setting up the equipment, and difficult to access positions that required a high working height and long side reach.

As Falcon Lifts explains, there is a growing need for spider lifts in buildings with complicated architecture that require them to be supplied with customised features for complex maintenance work. 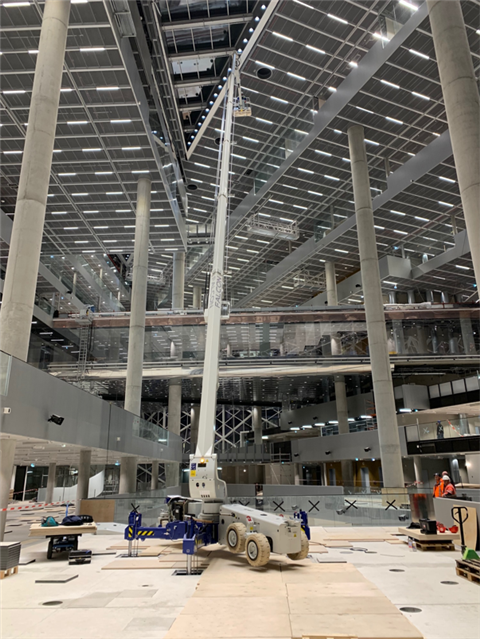 One of the requirements of the owner of the Axel Springer building was not to have built-in access for maintenance after the building was completed that would compromise the architecture of the building.

Therefore, gantries or gondolas were out of the question. The Falcon, on the other hand, can be stored in the basement between use.

Falcon Lifts was involved in the project from an early stage and provided design support during the planning and construction period.

One of the Danish manufacturer’s offerings is a total advisory access service from the design phase to the delivery of the final solution, working on both new buildings and retrofitting access solutions for existing buildings, as well as conducting reviews of established access solutions.

Dinolift’s distributor in Chile Vertitek supplied equipment to a new customer in Santiago, which had won a project from municipality Vitacura to erect a range of art on buildings across the area.

One of the buildings had a very challenging obstacle – a waterfall in front of the building, which already had very tight access to the area on which the art was to be placed.

The customer, which had won the project, looked around for a suitable solution using a more common aerial platform like a scissor lift or boom but none had the correct proportions or features to access the area around the waterfall.

With the spider lift market in Chile being very small and specialized, the idea of using this product type did not spring to mind.

Therefore, the company approached Vertitek to find a solution. It came in the form of a Dinolift 220XTC, which it supplied with an operator.

Ricardo Carrasco Pérez, director of operations at Vertitek, explains, “If you rent the units without an operator, most of the time customers don’t like it because they find it slow and difficult to operate, etc.

“That’s why we offer the units mostly with an operator by the hour, to help customers get the best of the rental time.” 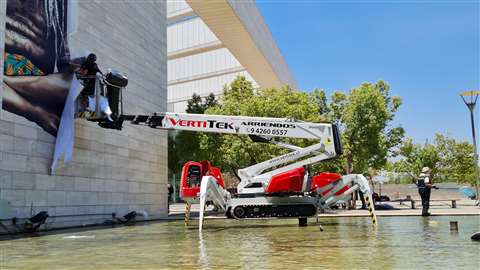 Dinolift 220XTC carries out delicate work in a fountain.

In this case, Pérez added, “After checking the depth of the pool we took our Dinolift 220XTC, which did the trick. Thanks to its none marking tracks, weight and reach it was the perfect unit to enter the pool and work from the inside.”

Vertitek recently received a hydraulic oil cooler kit from Dino to update the unit. “This gave the unit much better performance during hot summer days and nights,” adds Pérez.

“Sometimes we have to travel extreme distances in shopping malls to be able to get access to the area we need to work, plus six- to eight-hour shifts of intense usage. This feature is a game changer on our XTC and for shopping centre customers.”

A customer of CTE’s US dealer Innovativ Hoisting LLC, based in New England, used a T-230/75 for a roofing project at the Heublein Tower in Simsbury, Connecticut.

The 165ft tower is situated in the Talcott Mountain State Park at the top of a mountain. To get to the building, the public must take a 1.25 mile hiking trail.

While there is a small service and maintenance road to the side of the mountain, there is minimal space at the base of the tower, which is on the mountain ridge, with just a small staircase to reach the main entrance and a narrow access through the woods to reach the rear of the building. 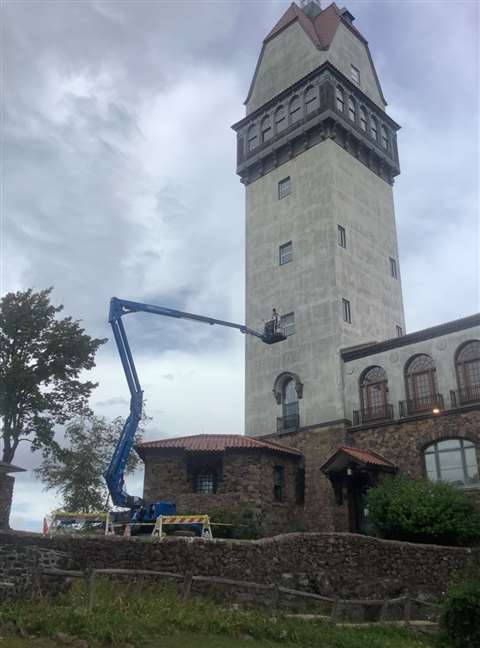 The CTE Traccess on site at the Heublin Tower at Talcott Mountain State Park in Connecticut, USA. Photo supplied by CTE.

Building restoration contractor Cenaxo used the CTE Traccess to move construction equipment and materials through the woods and up the mountain.

Once at the tower there was minimal space for set up, as the edge of the mountain is next to the building.

The possibility to place the outriggers independently and hydraulically in any position between 30 and 50 degrees was a key feature in allowing the operator to carry out the work.

Usually with a roofing project like this, scaffolding would be put up around the building, which is time consuming and costly. Instead, Cenaxo was able to move the lift along the perimeter of the building to access the whole roof.

By eliminating the need for scaffolding, the owner was able to save almost 50% of what the project would have cost, due to the amount of time that was saved.

The site is very well known and is in an official area of outstanding natural beauty, where the environment can be very challenging in terms of rapidly changing weather and wind through the valley. 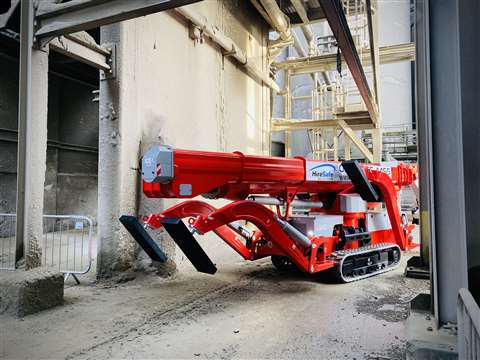 The main challenges of the project were to gain access to different parts of the roof of the cement works at different locations throughout the plant, with an up and over height of 19.5m minimum, with two workers, materials and tools to carry.

Importantly, an access solution short enough and narrow enough was needed to get in and around the facility.

According to Teupen staff at the site had at first been sceptical about using the new spider lift model being proposed by the Hire Safe Solutions team.

The new Teupen Leo 39GT Plus was put to the test. Part of the work was to repair rooflines and clean parts of the plant that were built during the 1930s and had remained untouched ever since. 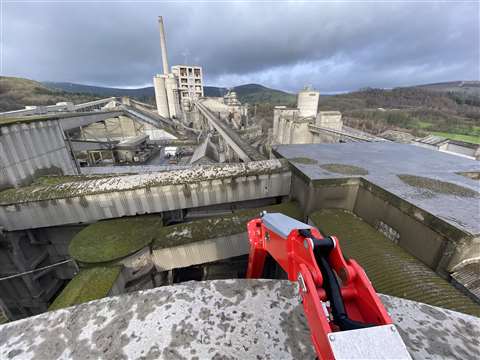 Teupen’s Leo repairing one of the roofs at Breedon Hope Cement Works. Photo supplied by Teupen.

An important part of the machine selection was due to the compactness of the unit.

Being extremely short in transport position, it was able to manoeuvre in and around the plants complex maze of conveyor belts and steel structures.

According to Teupen, the 400kg SWL/basket capacity was proven to be of use, along with the basket rotation and fly jib, as well as the outreach at working heights.

“The large safe working load in conjunction with the 2m large aluminium platform really helped complete this job on time and as planned; getting the vast amount of materials to the roofs, along with tools to carry out the repairs required.”

Looking to the future, the company says, battery drive system will be important due to stricter emission regulations around the world for combustion engines will force the spider lift industry to search after alternatives.

Palazzani provide two units to help with the electrification of a railway line between the towns of Pettoranello and Isernia in the south-central Italian region of Molise.

The Ragno XTJ 37 was used for negative work on a railway bridge, while a Ragno XTJ 43 was commissioned for works around tunnel arches. 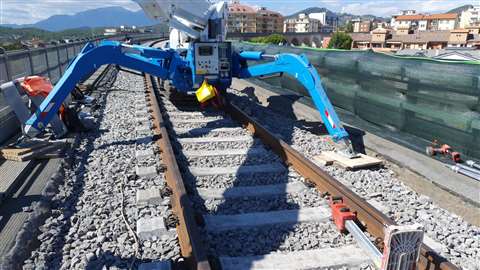 As Palazzani explains, workers had to carry out inspections on the railway bridge in question and subsequently core drilling and installation of plates to support poles on the external side of the bridge.

On some areas of the bridge it was possible to operate from the road below the bridge using the XTJ43, but at some points the work could only be carried out with access from above. The XTJ37 made it possible to carry out the work safely and efficiently.

The space restrictions on site meant there was less than four metres width at some points, posing a challenging scenario for the operators to secure the unit for the work. An onboard generator was necessary for the operation of tools in the basket.

Apart from this project, the manufacturer is working on features for a range of challenges posed by customers of spider lifts.

A recently-launched option from Palazzani is its new 980kg winch, which is particularly helpful in the increasingly challenging telecommunications field, with the introduction of 5G technology.

As the company says, its next developments will include the continued updating of software for smooth and flexible operation of spider lift equipment.