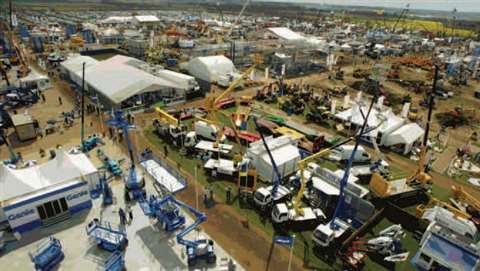 This year's SED will see dozens of new aerial platforms being introduced.

SED is always a pretty lively event, with the Cranes ' Access Village providing a concentration of access suppliers that is the equal of all but the biggest of the international events.

There is no doubt, however, that this year will prove to be especially interesting for the access buyer, quite simply because a lot of companies are showing new machines.

The full list of exhibitors is given on this page, but there are a number of obvious highlights, including.

In Russon Access represents Holland Lift in the UK and also, since February, will be selling Manitou's range of self-propelled booms to the rental sector (and has recently won a £2 million (US$3.85 million) order for 70 units with the Platform Company). In addition to Manitou booms, the company will show Holland Lift's new version of its G300-30 scissor, which has had its working height boosted from 30 m (98 ft 5 in) to 33.5 m (110 ft). Manitou scissors will be on the Manitou (Site Lift) stand.

CTE UK will have some surprises. As well as the long-awaited Z-26 and Z-32 models-both compact truck mounts-the company will also offer a new tracked machine, a version of which will also be on show at the Samoter exhibition earlier in May. Brian King, CTE UK's sales manager, says this machine will not be a ‘me too’ product, but will offer something new for the market. CTE UK is also now representing Italian mini-crane producer IMAI, and will have a CTE branded mini-crawler crane at SED.

Skyking, which is the Wumag and GSR dealer in the UK, will also have several new machines. One of these will be the GSR 198PX, a 19.5 m (64 ft) working height model on a 3.5 t truck. The company also promises another new GSR machine, but wasn't prepared to give advance details. The company will also show a Wumag 30 m (98 ft 5 in) machine and a selection of its van mount units.

Genie Industries will show, for the first time in the UK, its massive new features. Also new in Europe is the GS-3390RT scissor with oscillating axle; and the new 6 m Runabout, GR-20.

SEV Aerial Access shows a selection of trailer and truck mounted products, but just as important is the opportunity for visitors to assess the direction the company will take under its new owners, Tanfield Group. SEV has already moved to new manufacturing facilities in the north east of England, and product developments are also on the agenda.

An important development at SED this year is the welcome return of JLG as an exhibitor after an absence of five years or more. Expect to see a wide selection from the manufacturer's range, including telehandlers and possibly the new trailer mounted aerials being built in the US.

Italmec's UK dealer Ranger Equipment, based in Chesterfield, will show the R16 tracked machine, but the important launch for the company is the RJ20, “which represents the next generation of track mounted narrow access machines”, says the company. With a working height of 20 m (69 ft)and weighing just 2900 kg, this machine has a closed height of 1.99 m (6 ft 6 in) and width of 0.89 m (2 ft 10 in).

Gardner Denver Powered Access-the chosen access brand for the former Priestman and Powered Access products produced by Syltone before it was acquired by Gardner Denver-shows several new machines. The TDA145 is a 14.5 m (47 ft 6 in) telescopic machine mounted on a 5 t Iveco Daily short wheelbase carrier (and adds to the 13.5 m unit launched last year) and the company has also developed a 11 m (36 ft) working height model on the tiny 1.55 t GVW Piaggio carrier chassis cab that the company showed with an 8.5 m (27 ft) boom last year. Also on show will be a 13.0 m (42 ft 7 in) telescopic boom on a Ford Ranger pick-up truck.

Versalift says it will highlight the economic and productivity benefits of its van and truck mounted platforms, among which will be the ET36NF, a 12.9 m (42 ft) working height model on a 4.6 t GVW Mercedes Sprinter which will offer 900 kg of spare carrying capacity.

Promax Access Limited, which represents Basket, CELA and Dino Lift in the UK, will show the new Greentel, a range of CELA booms that can be mounted onto agricultural tractors and with working heights of 19, 21, 24 and 28 m. On show will be a 19 m unit fitted to a John Deere tractor.

Oil ' Steel will show a wide selection of its tracked and truck mounted platforms, but the spotlight will be on two new Octopussy tracked models, the 1412 Twin and the 1765. These will offer “the same level of compactness as the 1465 model, but with the added benefit of a 200 kg capacity”, said the company.

As we said, lots of new machines to see, and there are also notable launches at the nearby Access Daze show being organised again this year by Niftylift, Skyjack and others (see box story). Enjoy both events.