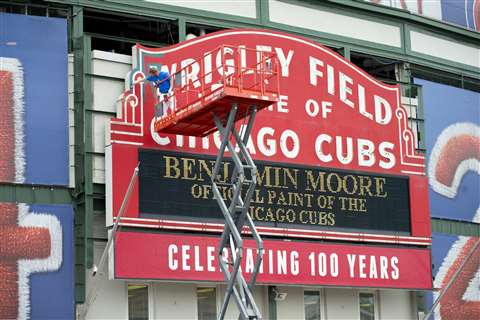 Skyjack had a number of machines at Wrigley Field earlier this year, including SJ 6832 RT scissors to help paint the marquee.

Steady growth. Increasing demand. High utilization. These are just some of the key phrases to describe the rough terrain scissor market in North America this year and for the months to come, many say.

“The North American market for RT scissors has been increasing over the last nine to 12 months,” says Mark Powell, Terex Aerial Work Platform’s product manager. “This is primarily driven by the increasing demand for large warehouse construction. We forecast a steady demand…”

In North America, both residential and non-residential construction metrics continue to improve.

“Rough terrain scissor utilization is closely linked to both residential and non-residential construction,” says Paul Kreutzwiser, JLG’s global category director, scissors/verticals. “As economies stabilize and recover, the demand for this type of access equipment improves. Some specific trends in type of construction spend help, for example in the U.S., infrastructure, energy and transportation construction are up over 2008 levels. These types of jobsites have more applications for the added platform size and capacity that RT scissors offer over other types of access equipment.”

However, despite the recent growth of the North American market, RTs in the past suffered from low utilization and ROI pressures, but Kreutzwiser says it is important to keep in mind what is unique and valuable about the RT class.

“RT scissors offer the largest platform sizes of all access equipment and boast the highest capacities with respect to rated loads and number of persons,” he says. “These features allow the machines to continue to be very useful and productive for certain trades, like HVAC contractors, or cladding installers.

“We anticipate that the market will remain steady for RT scissor lifts over the next 18 months, thanks to the strong levels of larger jobs and non-residential construction,” Ahern says.

While larger jobs and non-res propels RT use, new applications are evolving as well. According to Kreutzwiser, energy efficiency awareness is growing, resulting in changes to building codes and construction methods that affect the types of materials used.

“Insulated foam board cladding, often in 2-foot by 8-foot or 4-foot by 8-foot sheets is now common in many regions,” he says. “Fiberglass- or stone-based batt insulation is also finding its way into nonresidential buildings, as well as hi-density, multi-story residential. RT scissors are an ideal solution for insulation contractors given the large sheets of cladding or bundles/bags because the size of the RT platforms are second to none.”

Many in the RT sector have noticed a shift toward hybrid power options for RTs.

One example of this is Skyjack’s SJ 6832 RTE, which according to Malcolm Early, Skyjack’s vice president of marketing, marries the “class leading benefits of its diesel-powered counterpart with a powerful and efficient electric engine.”

Early says the electrically powered rough terrain scissor retains the benefits of being capable of elevating 1,000 pounds to 32 feet in a narrow and light package with an overall length and turning radius of up to 20 percent less than the class norm.

“It is the only machine in its class with 45 percent gradeability and four-wheel drive as standard,” Early says. “What sets the RTE apart is its near-zero noise levels, zero emissions and reduced maintenance costs and time due to the elimination of servicing filters.”

The unit is built on the same chassis as the existing diesel and dual fuel 68RT units, making the transition from 68RT lifts seamless to the electric version.

“Looking to the near future, like all AWP manufactures, the big issue for North America will be the new ANSI standards, which could impact the industry in early 2017,” Early says. “As far as the RT is concerned, the impact will be mostly on stability issues and the use of load sensing, which have normally been used on European machines. Although Skyjack will work to minimize the impact to customers, it is unlikely that the market will escape completely and that means changes to design, operating usage and, ultimately, cost.”

For MEC Aerial Work Platforms, which expects steady growth overall for its RT scissor range, some of the biggest developments have been offering 4WD scissors with DC power to the RT segment.

“Along with DC power has evolved the hybrid option that allows greatly extended duty cycles and charging on sites without mains power,” says Deanne Hix, director of strategy and marketing. “A small on-board diesel engine can be either automatically or manually engaged to re-charge the batteries. Trade users have been listened to for safer, more productive methods of working which resulted in the sheet material tray found only on MEC machines. Higher is the direction of the large RT scissor from MEC, again in response to market demand, yet not for height’s sake but with a purpose of making a product that is both more profitable for the owner and more productive for the user.”

MEC also worked over the last five years to introduce the Crossover scissor lift that crosses the traditional distinction between an indoor slab machine and an engine-powered outdoor machine.

“The Crossover uniquely offers a machine that can meet the majority of the needs of each in one product,” Hix says. “Pollution free, silent and compact for when a project closes in, yet possessing 4WD and gradeability that allow it to easily get around un-improved jobsites at the beginning of a project. Effectively, this offers a single 26-foot or 32-foot machine that can achieve improved ROI through greater utilization and reduced transportation costs as the first machine on and the last off the jobsite.”

MEC also offers the 4069 machine in either electric or diesel.

For Terex AWP, it has developed and expanded its GS-69 RT family, most recently introducing the GS-69 RT/BE (bi-energy) in early 2015.

According to Powell, the GS-69BE hybrid scissors are being used in applications and on jobsites that require a rough terrain capable machine that can self-charge and power hand tools from the integrated onboard generator set.

The awareness of the GS-69BE hybrid continues to spread, Powell says, especially internationally.

On JLG’s newest and largest RT scissor, the 530LRT 53-foot RT scissor, the hydraulic system was designed to optimize performance of the new generation of low power engines. A unique three-pump hydraulic system allows for optimization of all drive and system functions allowing the 530LRT to utilize the most fuel efficient and lowest maintenance engines while maintaining class competitive drive speed and gradeability, according to Kreutzwiser.

Over at Snorkel, Ahern says the company is currently working on updates to its current compact RT scissor range, which will include the introduction of a common control system. “We are also exploring the addition of new models to expand our height range offering, as well as developing scissor lifts with higher capacities.”

“We expect to see further developments in alternative power sources, such as electric and hybrid, lowering emissions and reducing running costs,” Ahern concludes. “We anticipate that product lines of RT scissors will increase in the coming years, with manufacturers focused on developing solutions which expand product capabilities and deliver the features required by operators, as well as the serviceability demanded by rental customers.”

Overall, many agree that within five years, a new ISO standard will be adopted and scissor lifts will see major changes in safety and design.

“In the future, look for more compact and powerful RT scissors with even greater battery life that further bridge the gap between traditional IC machines and DC power models,” Hix concludes.