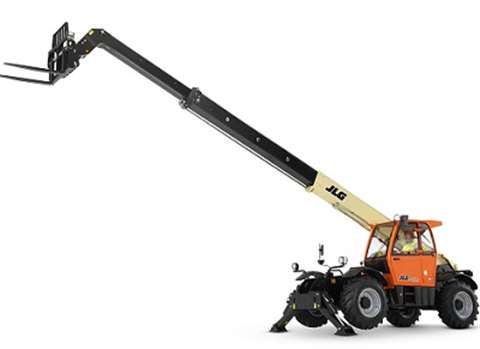 As the man behind what is currently the largest telehandler produced in the U.S. (the behemoth 70,000-pound-capacity Xtreme XR7038), Don Ahern isn’t all “bigger is better.” Ahern, the owner of Xtreme Manufacturing which is known for its robust – and typically large – telehandlers, says demand from rental as well as higher construction activity across the U.S. has fueled the need for smaller teles.

Compact telehandlers are typically used within the general construction sector, and also through a variety of application channels including non-residential, residential and masonry construction. The units can also be used with landscapers, contractor’s supply yards, recycling facilities and farmers, says Roy Vinden, product specialist for Caterpillar.

“The market for compact telehandlers in North America is growing at a tremendous pace, with the industry averaging double digit growth year over year since 2011,” says Mike Peterson, product specialist for Caterpillar. “Similar pace of growth in 2015 should be expected as customer acceptance of these versatile machines on the residential and commercial jobsites grows.”

Caterpillar has a number of products in its pipeline, including an additional compact model set to launch in the next 12-24 months, Peterson says.

Also new for 2015 is JCB’s compact 525-60 Hi-Viz telehandler, which was shown at ConExpo 2014. Stuart Fox, product manager at JCB, says there is a backlog for the 525 right now and that the tiny tele has “drive up a lot of excitement.”

The maximum lift height is 20 feet and maximum load capacity is 5,500 pounds. Prior to the 525, JCB had five compact models, so they took the best features from those units and put them into the 525.

“Rental [companies] love compact units because they are versatile – you can use them in parking garages or for snow removal,” Fox says. Many compact units can use skid-steer attachments, making them even more of a Swiss-Army-Knife tool.

“The versatility of the Cat TH255C, with an optional skid steer coupler interface, gives contractors the ability to add lift height and reach to the bucket and fork loading capabilities normally required of a compact construction machine,” says Peterson.

Additionally, compact telehandlers have the ability to shift the machine sideways with crab steer mode for minor adjustments in delivering a load, as well as maneuver in limited spaces with a tighter turning radius and lower machine heights than similarly sized compact wheel loaders.

“The Caterpillar compact telehandler was designed to appeal to a wide customer base, however, to address the rental requirements specifically, we intentionally kept the controls simple to account for the wide variety of operator skills,” says Vinden.

For Genie, its compact GTH-5519 is one of its most-popular telehandlers. The GTH-5519 was upgraded and shown shiny and new at ICUEE 2013. The company made a number of changes to one of its top-selling teles, including a reduction in length by 5 inches and an increase in wheelbase by 2 inches. The unit’s turning radius was decreased by 3 inches.

The telehandler’s main design changes were reflected in the engine choice, cab design, serviceability and product quality, the company says.

“This telehandler is even simpler to use and service,” said Chad Hislop, director of product management for Genie. “It is easy to drive and offers industry-leading load capacity for its size.”

The Deutz TD 2.9 L4 Tier 4 final engine is designed in such a way that it does not require a diesel particulate filter, only a diesel oxidation catalyst muffler. The power of the engine is 74 hp at 2,600 rpm.

The chassis includes housing to allow access to the hydraulic connections and air bleeding valves. On the radiator top block is the coolant expansion tank which includes an electrical coolant low level sensor. The radiator includes an oil bypass valve which simplifies installation of the hydraulic system.

“The Genie GTH-5519 is an ideal workhorse for today’s jobsites,” Hislop says. “As a general purpose machine, it can fit into tight spaces, help unload trucks, and can efficiently carry tools such as augers and sweepers.”

According to Boeckman with JLG, the company’s SkyTrak brand is one of the best-selling telehandlers on the market in North America.

“This product range is designed to provide the user with a machine that is reliable, simple to use and easy to service,” Boeckman says. “SkyTrak machines also incorporate a Stabil-Trak system, which increases operator confidence when landing loads. JLG brand telehandlers are appreciated by customers for their productivity, which manifests itself in operator comfort, fast boom speeds and strong load charts combined with a powertrain that delivers outstanding jobsite terrainability.”

The reconditioning program involves tearing down the machine, inspecting it, replacing components based on wear, reassembling the machine, and repainting it – essentially restoring the machine to “like new” condition.

“We added the telehandler reconditioning program to meet customer demand for stock equipment and customer-owned equipment,” Boeckman says. “Recently, we’ve seen an increase in demand for reconditioned assets, whether that be customer-owned or in JLG’s stock. One reason for this is that our customers need to balance their fleets. We heard our customers’ feedback and wanted to offer them a better price point in the market, with the same quality that they expect from JLG.”

Meanwhile, 2015 could be the year we see a familiar AWP face start to push out telehandlers. Since being purchased by Ahern, Snorkel is in a natural position to produce rental-ready, simple telehandlers since its owner is also the owner of Xtreme.

“Snorkel will be launching their own range of compact telehandlers during 2015,” Ahern says. “More details will be released at The Rental Show 2015.”

With Xtreme telehandlers designed to “consistently outperform all other products on the market and come equipped with a significant number of standard features, which both increase the life of the equipment and improve the experience for the operator,” Ahern says, it will be interesting to see how the Snorkel telehandlers stack up. All Xtreme compact telehandlers feature 360-degree visibility, a boom lift point, driver suspension seat and long-life boom rollers for smooth operation. In addition, all Xtreme telehandlers are sold as standard with their market-leading 10-5-2 warranty.

In North Carolina, Applied Machinery Sales (AMS) has been importing Italian Merlo units since 2012. Predominantly used in agriculture and sometimes in such applications as poultry, the units are gaining traction in the construction industry, says AMS president Garth McGillewie.

Merlo decided to move into North America due to the then-slowing market in Southern Europe. “AMS-Merlo was launched on the basis that businesses around the nation are not getting the best machines and service that they deserve,” McGillewie says. Since its inception, AMS-Merlo has grown and the company has been able to work with hundreds of dealers.

Merlo’s State-side compact units’ feature reduced dimensions (5.9-feet-wide by 6.2-feet-tall on the P 25.6) that make these telehandlers ideal for work in restricted environments.

“The chassis architecture is innovative and the telescopic boom is extremely compact and built using the tried and tested Merlo system of having all the mechanical workings within the boom structure,” McGillewie says. “The extension components, hydraulic, and electrical systems are well protected within the boom structure. By not leaving parts on the exterior, damage caused by the inevitable knocks received on the work-site is avoided.”

French-manufacturer Manitou also has a compact unit in its product lineup. The MT 5519 is the company’s smallest telehandler; featuring a lift capacity of 5,500 pounds, lift height of 19.10 feet, maximum reach of 11 feet and features a 68 hp engine.

Manitou’s partner, Gehl, has a similar unit – the RS5-19 telehandler with a rated capacity of 5,500 pounds and maximum lift height of 19 feet, 1 inch, as well.