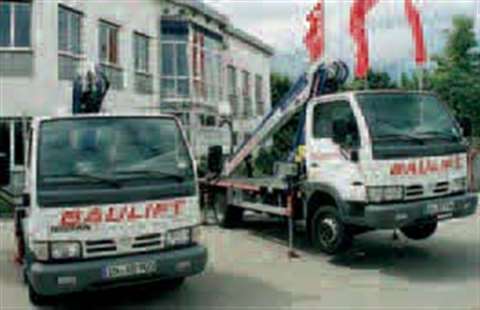 Baulift has added over 50 machines to its fleet this year, including 20 truckmounted platforms from OP Pagliero, mainly 24 and 16 m machines.

Baulift would make a good case study for an MBA student. How does a small, privately-owned company adjust to a severe economic recession combined with a sudden influx of competition from larger players?

Herbert Limmer, the founder and owner of Baulift, which is based in Ingolstadt, 70 km north of Munich, would probably not claim any special expertise, but the actions he has taken over the past five years have so far proven to be spot on.

Rental prices were coming under pressure even then, Mr Limmer tells AI, but it was the entry into the market of Zoom, and the downturn in the G erman economy, which forced it to reconsider its strategy; “The Zoom decision [to enter the market and expand] was only right when the market was growing, but the investment was in a downward market, and it was the wrong decision. Zoom is only an example; others did the same.”

For Baulift, the increasing pressure on rates and the greater numbers of platforms chasing a diminishing or steady level of work meant some hard decisions. As a result, over the past five years the fleet has come down in size to nearer 400 machines, the number of employees has fallen from 55 to 30, and the company has become choosier about his customers.

“We have left the deep price customers, and we are concentrated more now on the Bavaria area. At first, we would send machines 300 or 400 km, but now we do it for 100 km. The reason is the cost of transport: we had a hard calculation-we know that we have customers within a 100 km radius, but over that, we say you have to pay €200 for transport. They can do it cheaper with a local company.”

This ‘short-range’ policy has also been adopted at Baulift's three other depots, in Zwichau in the east of Germany, Luxembourg to the west, and the Tirol area of Austria further south. The strategy has allowed the company to scale back its transport fleet.

Just as important was the decision to ‘mothball’ around 100 of its older scissor lifts, mainly 10- or 15 year-old machines from Liftlux, MEC, Holland Lift and Simon in the 10 to 18 m range. Rates in these sizes of machines, says Mr Limmer, remain “very bad”. Some-with batteries removed-are still sitting in Baulift's large Ingolstadt headquarters.

“I was making a loss of €5 on each machine every day, so we decided to take them out of the fleet. We didn't lose a lot of customers, but we did leave the cheap payers. It was the right thing to do”, he says. Why not sell the machines? He says the prices would have been very low and prefers to wait for the right type of customer to come along and then sell them.

If Mr Limmer thinks that Zooom has contributed to Germany's problems, then Zooom might point out-as it has in the past-that it has been very difficult for it to compete with new machines against private companies who have aged their fleets and are able to depress prices.

Mr Limmer's own fleet age averages around five years, and the older models-the scissors-have been removed from the fleet. And he, like Zooom, laments the low rates on the market; “The German market should not be a ‘third world’ market with used machines and low prices”, says Mr Limmer, “Sometimes I see machines that I wouldn't get into.”

On the positive side is that rates are not getting lower, and payment problems are experienced less often. “We had customers who didn't pay”, he says, “Now that situation is better-we get the money we agreed. It was a great problem.”

The changes that Baulift has made in its fleet and customer base have allowed it to survive the worst of the recession and, now, achieve results that are “deep in the black”. Investment in new machines has been justified, with the company this year adding 20 OP Pagliero 25 m, 22 m16 m truck mounts; 25 machines from Haulotte, including 7 m scissors and 10 and 15 m articulated booms; and 9 Aichi SP 21 AJ telescopic booms. Mr Limmer says the fleet mix, with truck mounts representing a quarter of the 400 machines, is just about right.

Like many other rental companies, Baulift is planning to open some more depots, with up to three planned near its current areas of operation. “We're not ready yet, but we have thought about it, and will decide in the next two or three years.” This expansion, if it occurs, will be used to help drive up utilisation rates. Mr Limmer will not say what the current levels are, except that they are lower than he would like. “Maybe with more depots we will get better utilisation”, he says.

You can be sure that the decision will not be rushed, and it will also depend on the progress made by the German economy. That subject alone, of course, could keep many an MBA student busy for years.