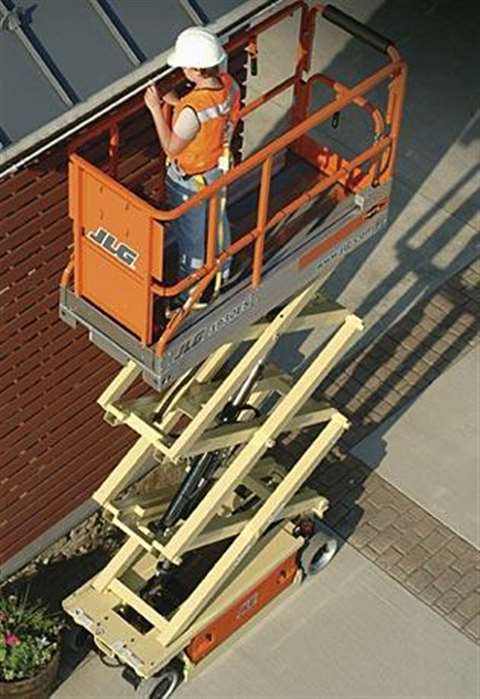 JLG's 1930ES scissor lift has an elevated platform height of 18 feet, 9 inches and is 30 inches wide.

There’s nothing magical about the number 19, yet there’s a misconception that general contracting projects like framing, painting and installing HVAC, electrical systems or drywall require a 19-foot scissor lift. But there is more to choosing the best lift for your job than just how high it can go.

Although low-level scissor lifts come in just below that 19-foot height, they go above and beyond their size in terms of capabilities. The only thing these lifts are typically missing is the number 19. However, with close examination of the job, the specs and the features of the low-level access lifts, an operator will quickly find that their labels don’t do them justice. The low-level access lifts are designed to increase safety, efficiency, ease of use and convenience, all while having the ability to complete 90 percent of the jobs contractors typically reserve for 19-foot lifts. An added benefit is that, because of their size and maneuverability, the low-level lifts can be the first piece of equipment on the site and the last to leave.

The truth about working height

Nineteen-footers might lift workers a little higher, but closer examination could reveal they are holding them down.

One of the key factors to consider when evaluating a lift beyond just height is working space. Having ample space in which to work and carry tools is critical to a contractor’s efficiency and safety. Whether hanging drywall or installing HVAC, extra space and capacity allows for an extra person, as well as easy access to all the materials needed to efficiently accomplish the task. The result is elimination of the need for multiple trips up and down.

Nineteen-foot lifts typically offer an average capacity of 500 pounds, resulting in diminished capacity for drywall, ductwork or materials. Many low-level lifts have two-person occupancy but also can hold more weight – up to 750 pounds on some models. The results are fewer trips up and down and less time to get the job done.

Platform sizes on low-level lifts range from 25-30 inches wide by 60-70 inches long. For even more room, extensions add up to 36 inches of platform length.

A scissor lift that can handle the weight and capacity of two workers plus all the tools certainly is a productivity benefit; finding a feature that also provides easy access for those workers and their materials not only can enhance productivity, but safety as well. The potential for increased safety and productivity makes entry height a critical aspect to consider.

Entry heights on 19-foot lifts can be as high as 42 inches, which makes getting onto the lift a challenge, especially when carrying tools and supplies. Often, accidents and injuries occur during entry, and they equate to lost time and increased workers’ compensation costs. Combine the increased risk with a lower capacity and more trips up and down, and more entries and exits from the lift, and the injury risk exponentially increases. Even without a major accident, the repetitive motion on and off the lift while carrying heavy materials can cause repetitive strain injuries (RSIs) in the knees or back. Some lifts feature a small ladder, which increases the danger even more because it makes access challenging and stepping off downright treacherous.

Low-level scissor lifts are designed to cater to the contractor and maintenance markets with entry heights as low as 20 inches or only one step, which makes getting on and off the platform easier and safer. The lower height reduces the potential for all of those injuries and costs. Users get even easier access with full swing gates. They can step onto the platform with tools and materials in hand instead of ducking under and moving materials up and over bars or chains, which can lead to neck and back strain.

Taking a load off

Getting jobs done quickly and without causing inadvertent damage is key to meeting time constraints and staying on top of the bottom line. The last thing a contractor wants to do is spend time and money on repairs that easily could have been prevented.

Heavier lifts have higher concentrated wheel loads that can damage delicate flooring like tile, mezzanine floors and raised floors. Also, because of their weight, they typically can’t access work on freshly poured concrete until it has fully cured, which could take up to 30 days and delay projects.

Since taller, 19-foot lifts can weigh as much as 3,300 pounds (JLG's 1930ES weighs 2,750; MEC Aerial Work Platform's 1932ES weighs 3,060 pounds; Snorkel's 1930E is 3,160 pounds; Skyjack's SJIII 3219 comes in at 2,580 pounds and Terex AWP's GS-1930 weighs 2,702), the risk of causing damage to floors in finished spaces like hospitals and campuses is greater. Low-level lifts can weigh as little as 600 pounds and some feature dual front wheels that help disperse the weight and wheel-load concentration. Together, those aspects allow operators to tackle projects on freshly poured concrete sooner and access jobs on delicate flooring with no damage.

To further prevent damage in finished spaces, many units also feature non-marking wheels that prevent scuffs on hard surfaces. Some low-level lifts also are equipped with counter-rotating wheels; while one wheel rotates down, the other rotates up. This motion reduces the friction point so the lift can maneuver over carpet without causing tears.

Heavier lifts aren’t the only thing that can damage floors; hydraulic systems can be a culprit, as well. Hydraulic systems that operate the lift’s steering, driving and lifting have more routing with six to eight connection points. If these points become loose, fluid can leak and damage carpeting, which will require costly replacement. Not only that, but fluid that leaks onto hard surfaces like tile or laminate creates slip hazards. Nineteen-foot lifts feature hydraulic steering, driving and lifting, which means there is an increased risk for damage and safety incidents, which in turn can lead to more workers’ compensation claims.

The hydraulic system on low-level lifts typically only powers them up and down, while battery power operates the driving and steering. This configuration has only two connection points, so the chance of a leak is greatly reduced. Some even feature a fully contained hydraulic system, so even if a leak occurs the fluid does not escape to damage carpeting or create hazards.

Getting around (or under)

Maneuvering between studs and walls, around tight corners or into small spaces can be challenging with a lift. Many are no wider than 32 inches, well within the width of most doorways in commercial applications. However, those with higher stowed heights can make ducking under doorways or into elevators with drywall or framing on board nearly impossible, and it limits the range of work that can be performed with the lift. Also, lifts with wider turning radiuses might not be able to maneuver around tight corners.

Low-level scissor lifts can be as narrow as 25 inches, and they feature stowed heights as low as 66 inches. This provides more clearance for getting under doorways and into elevators, even with taller materials on board. Low-level lifts also feature platform lengths as short as 47 inches, so they can easily fit in any elevator in the United States that’s built to code. In addition, some models allow operators to turn in shorter radiuses, some as low as zero, for easier maneuverability around tight corners and into hallways or small offices without assistance from other crewmembers.

As mentioned earlier, using low-level lifts increases efficiency and productivity. More important than those benefits, however, is the impact these lifts have on worker safety, especially when compared to ladders. According to OSHA, falls from ladders are one of the leading causes of occupational injuries and fatalities. The risk is so great that some countries have enacted strict regulations on their usage. Users also can suffer from less serious injuries like bruising and tenderness on the soles of their feet from standing on a ladder’s narrow rungs for extended periods of time. While there are times, places, and projects for ladders, general contracting or maintenance jobs usually aren’t among them.

Nineteen-foot scissor lifts might take you a little higher than low-level lifts, and they are certainly safer than ladders. But when comparing what really matters on a jobsite, it goes beyond simple height capabilities.

The benefits of the thoughtful design of low-level scissor lifts aren’t just smoke and mirrors. Whether you’re hanging drywall, installing sprinkler systems, painting or doing electrical work, your lift’s features should allow you and your employees to get all these jobs done safely and easily. With 14- to 20-foot working heights, low-level lifts are revealing that the “higher is always better” perception is the real illusion.