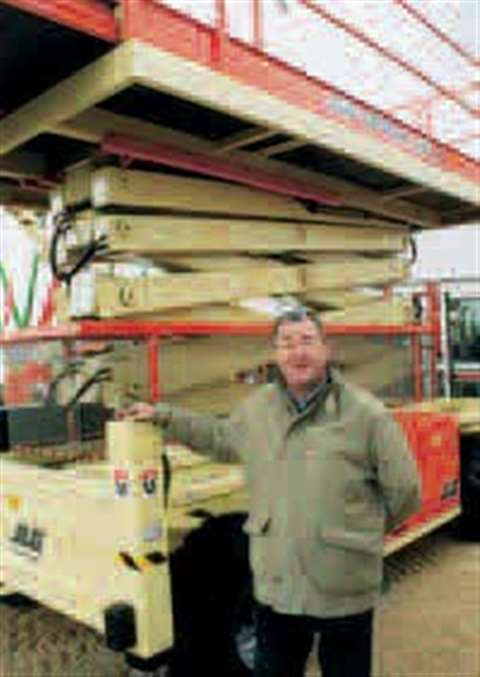 Nicholas Davin of Access Platform Sales in Ireland in front of his new JLG Liftlux 153-22 scissor. JPG will use APEX to launch new, narrow, electric Liftlux models and will have either the 153-12 or 1

As our Access-50 listing shows, Europe's access rental companies are buying again, which makes this year's APEX exhibition a serious affair: not just a talking shop, but a real shop window.

The three-year gap since the last APEX-the normal two-year cycle was extended at the request of suppliers-not only makes the event well-timed for the upturn in demand, but also means that visitors will have a genuinely exciting selection of new equipment to see. Every exhibition has its fair share of platform launches, of course, but APEX is an access-only show and therefore the natural place for important major introductions.

The show again enjoys the official support of the International Powered Access Federation (IPAF), which told Access International that it expected the event to be “the most important meeting place for the powered access industry this year.”

AI, which sponsors APEX and organizes the free conference, will publish a full guide to the event in its September issue, giving details of exhibited equipment. In this issue's Show Preview we highlight some of the products known to be aired in Maastricht. The official show website (www.apexshow.com) presents a full list of exhibitors and many of them, if not all, will have something new on their stands. This selection should whet your appetite:

Aichi: The Japanese company is keeping tight-lipped over details of its new range of machines, allowing only that new wheeled scissors and articulating boom machines will soon extend the product line. APEX will see Aichi unveil its plans.

Bronto Skylift: A new 90 m platform destined for Belgian rental company Maes. This will be the world's highest fire fighting machine and Bronto's biggest yet.

Emrol: The battery charger specialist will exhibit its Extreme charger, ideal for electric scissors, and the versatile Multipac charger. Genie Industries: The innovative new Z135 articulating boom, of course, but also a smaller, new, articulated machine, the Z-51/30. Genie says this will be an addition to the range and not a replacement for the Z-45, which will still be in production.

Iteco: The Italian manufacturer will have at least two new models from its updated range of scissors, including the all-new 15230, a 700 kg capacity diesel or diesel-electric machine. Later this year will also see new 15 m articulated booms-Iteco will have details on its stand.

JLG Industries: Will possibly have one of the two new 10.5 m/15 m trailer-mounted platforms, and definitely one of the two, new narrow Liftlux electric scissors, either the 153-12 or 180-12 (15.3 m and 18.0 m platform height models with 1.2 m widths). Also a selection of Liftlux diesel scissors, Toucan platforms, booms and telehandlers.

Kors/Omme: Among products will be the Frisia Lift crawler scissors made by HTN and the new Omme 1930R on tracks.

Merlo: The Space 11 access platform attachment for use with Merlo's telehandlers, offering an additional 11 m of working height in addition to the reach of the telehandler arm.

Pinguely-Haulotte: New 16 m and 20 m truck-mounted platforms-the first of a planned full range-and a 23 m articulating boom, its largest ever.

Ruthmann: German truck-mounted platform specialist Anton Ruthmann has recently added a 21.5 m working height T 220 model to its Steiger T range, first introduced late last year, and says further models will be launched through the year. APEX will be one of the first opportunities to see them up close.

SEV Aerial Access: Now under the ownership of the Tanfield group and manufacturing in far larger, dedicated premises, SEV Aerial Access is looking for a higher profile on the market. New launches at APEX will include new trailer-mounted platforms.

Snorkel: Making an impact in Europe again following its re-birth in the US, Snorkel and its European dealer, Omniconstruct, will show two new slab scissors, the S2646 and the S3246, and the new TB47J telescopic boom.

Socage: The Fassi Group company will have new truck mounts on 12 t and 18 t carriers from its Cheyenne and Sioux ranges, as well as new 20 and 22 m Navaho crawler-mounted platforms.

Teupen: The Germany company will have a selection of its truck-mounted and specialist platforms, including a 50 m Leo 50 GT bought by Belgian company Maes.

Used equipment: Several companies will be exhibiting used machines, including AJ Access Platforms, Height for Hire and dk Rental. The latter has just launched a used platform business and has 200 units available to buy. Tony Mort, managing director of AJ Access Platforms, points out that used equipment prices are rising because of lengthening delivery times on new equipment.

Worldlift Industries: APEX will be one of the first times the new company has exhibited and will allow visitors to gauge how newly-merged E Falck Schmidt and Denka Lift are working together.

See AI's September issue for a full guide to the exhibitors.