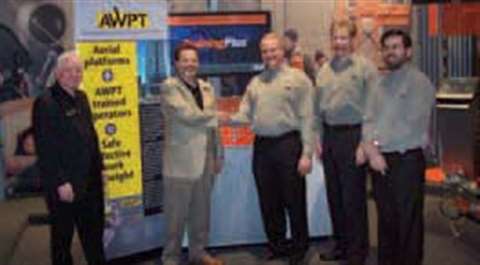 The ConExpo show in Las Vegas last month proved to be a landmark event for IPAF, with agreement reached on the opening of three new approved training centres by manufacturers in North America.

IPAF managing director Tim Whiteman said: “ConExpo surpassed all our expectations. It was such a successful event for us and really showed how quickly momentum is gathering for AWPT training and the PAL Registration Card in North America.”

IPAF operates in North America through its subsidiary Aerial Work Platform Training, Inc. (AWPT). Both companies exhibited together at Conexpo for the first time and drew a lot of traffic to their stand. “It wasn't just American visitors that we had,” said Mr Whiteman. “We also saw many people from Europe, Asia and Australasia wanting to know more about IPAF training and the PAL Card scheme.”

The major event of IPAF's week, however, was securing agreements with three more manufacturers to provide AWPT training in North America. JLG, which already runs IPAF-approved training centres in Europe, has agreed to offer AWPT training for mobile elevating work platform operators at its factory in McConnellsburg, Pennsylvania, alongside its own established training programmes. “This is a significant step for both JLG and AWPT,” Mr Whiteman said.