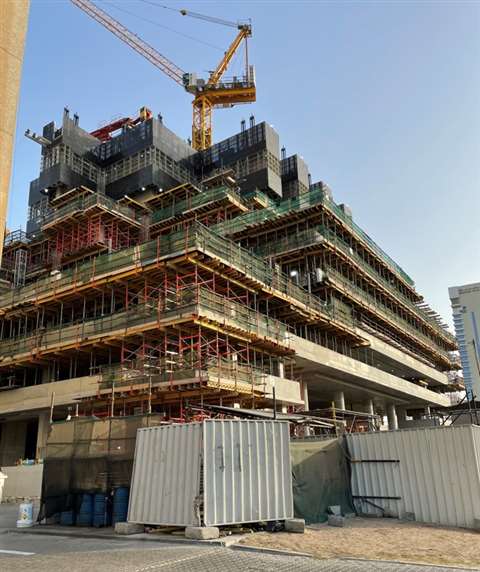 The S development in Dubai is being built by Sobha Realty. (Photo: Schindler)

Schindler’s newly upgraded Climb Lift system is to be used on two high-rise projects for the first time, signalling its entry into the European and Middle East access equipment markets.

The Climb Lift is a self-climbing vertical transportation system that has recently been procured for use on two separate contracts: the 245m-tall Elbtower in Hamburg, Germany, and for a new development in Dubai, UAE.

Capable of transporting both materials and personnel at speed of up to 3 metres per second, the new lift version can be installed inside a high-rise construction’s standard elevator shaft.

This means it benefits from reduced “exposure to external weather conditions that would otherwise restrict or complicate construction operations that use an external hoist system”.

The internal system, which can be used on buildings measuring 150m and below, offers an average hourly payload capacity of 48,000kg/h or carry a passenger capacity of 600kg per hour.

According to the manufacturer, the internal design of the Schindler Climb Lift enables construction work - particularly to façades - to be carried out faster, enabling completed areas within a tower to be rented out or sold earlier.

Schindler says that these factors can help to reduce cost of building typical high-rises by up to 5%. 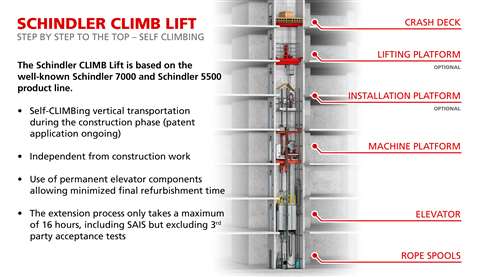 “The 64-story Elbtower in Hamburg, Germany will showcase the first real-life application of the system’s latest design option – which enables integration of the lifting platform and crash deck with the building’s formwork,” said Schindler.

While construction of the Elbtower will not see the platform installed until mid-2023, the building will eventually host 14 Schindler 7000 and 24 Schindler 5500 elevators when it opens in 2025.

Similarly, the 60-story 230m signature tower in Dubai will eventually incorporate 11 Schindler 7000 SD and three Schindler 5500 elevators when it is completed in late 2024, with the first Climb Lift to be installed in November 2022.

Known as “The S”, the US$400 million Dubai development is being built by Sobha Realty and its in-house design firm, PNC Architects.

It will comprise a mix of office and residential space consisting of 85 luxury apartments.

Stefan Weber, Head Large Projects Operations at Schindler, said, “The Schindler Climb Lift has now been installed more than 170 times since it was introduced over 20 years ago, and customer enthusiasm for it is still growing – and spreading to new territories.

“Whether it’s an advantage as simple as avoiding the need for workers to queue outside in harsh weather conditions at the start of their shift, or as profitable as incorporating permanent elevator components from the very beginning to speed up the final installation, the Schindler Climb Lift offers a host of benefits that can help streamline any high-rise project.”