Vehicle mount manufacturer Multitel Pagliero has confirmed that the aquisition of its distributor in Belgium Rentalift, by TVH Equipment, will strengthen its presence in the country. 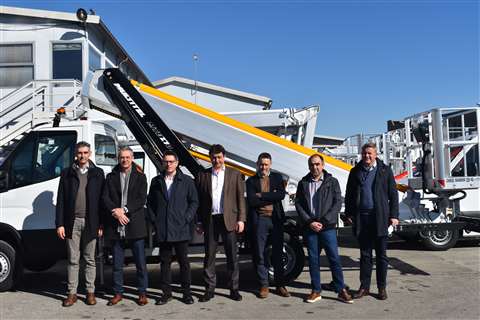 In January it was announced that TVH Group’s Belgian subsidiary TVH Equipment had expanded its footprint in its home country with the acquisition of access specialist Rentalift.

It was followed by a visit from representatives of TVH and its rental division mateco to Multitel, at its headquarters in Italy to confirm the continuation of the distribution agreement.

A Multitel spokeperson said, “Rentalift has been distributing Multitel machines for many years in Belgium and their introduction into the mateco and TVH Equipment organisation lays the foundations for a strengthening of the Multitel presence in Belgium.”

Thanks to the TVH Equipment buyout, Rentalift will be able to expand its sales, rental and service offerings throughout the Belgian territory. “Furthermore,” said Multitel, “This renewed partnership, in addition to the consolidated relationship between Multitel and the various mateco rental offices, strengthens the commercial link between the two companies and makes it a strong future-oriented agreement, considering the size and marketshare of mateco with 150 offices in Europe, Mexico, Panama and Chile and over 80 partners worldwide.”

Mulititel added that this would not just allow the company to strengthen presence in Belgium but on a global level too.